Last week, my wife and I had the privilege and joy to celebrate our anniversary on board IMC Concerts’ and Inspiration Cruises’ 2015 Gospel Music Celebration Caribbean Cruise.  For us, it was our first cruise of any kind, so we were equally excited by the “cruising” aspect of the trip, and the gospel music part.  The cruise took place on Holland America’s luxurious MS Westerdam, making stops in the ports of Grand Turk, San Juan, St. Maarten, and Half Moon Cay, Bahamas.  The gospel music artists on board were the Booth Brothers, Greater Vision, Legacy Five, the Mark Trammell Quartet, Triumphant Quartet, the Jim Brady Trio, 11th Hour, TaRanda Greene, Danny Funderburk, Tim Lovelace, and the Cathedrals Family Reunion. 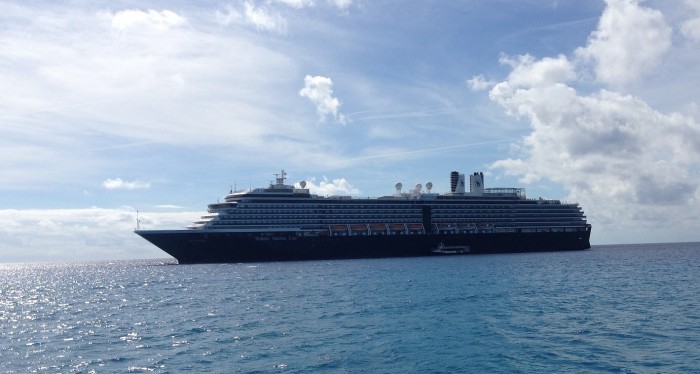 This is a gospel music blog, so I will be focusing on the music here, but make no mistake: cruising the Caribbean is an incredible experience.  Being on the vast open sea, with no land in sight, is a stunning reminder of just how big creation, and creation’s God, are.  And God’s creation doesn’t come much more beautiful than in 80-degree weather on the pristine beaches of the tropical islands. 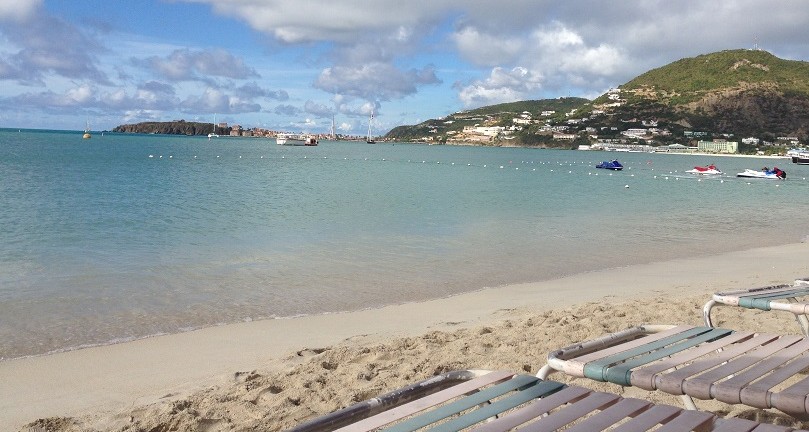 The music itinerary consisted of seven evening concerts (one each night of the cruise), six of which featured three or four of the artists on board.  The exception was Monday night’s concert, which was a Cathedral Family Reunion event.  There was also a Sunday morning worship service including music and and a message from Mark Trammell, and morning and afternoon showcases throughout the week, including a “Stories Behind the Song” songwriter event, a hymn sing hosted by Gerald Wolfe, a “Comedy & Piano” showcase, and the Christmas Jubilee, featuring the Booth Brothers, Greater Vision, and Legacy Five.  Finally, there were two morning chapel services and four separate “meet and greet” sessions with the artists.

Instead of going through individual concerts, I thought I’d provide highlights from each of the artists on the cruise, each of whom sang several times throughout the week. 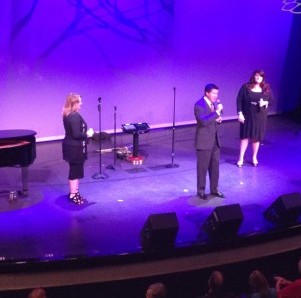 For most of the people on board, including me, it was the first time seeing this young mixed trio in concert.  I at least came in familiar with a good bit of their music, having given favorable reviews to each of their Crossroads recordings.  Amber Eppinette, Grant Gibson, and Jaquita Lindsey proved to everyone that they could flat-out sing, with powerful and tight harmony.  They also showcase the songwriting talents of Eppinette, singing several of her songs.  11th Hour surely left this event with many new fans.

Song highlights: Picture This, Waving on the Other Side 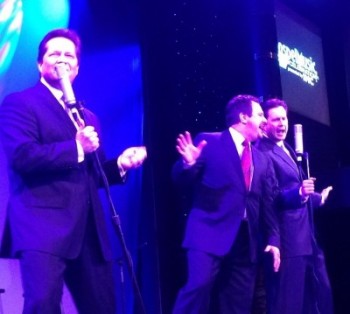 Most cruisers, including me, were seeing the Booth Brothers for the first time with new baritone Paul Lancaster.  For me, it was the first time seeing them at all outside of a short NQC set.  I gained new appreciation for not only their music ability, but their exciting stage presence, and their sincerity as presenters of the gospel in song.  The Booth Brothers were absolutely dynamite during this event and provided several of the week’s most memorable musical moments.  Lancaster is an outstanding fit, and if this cruise is any indication, they will remain at the very top of the gospel music genre for some time.  They sang eight songs from their new album, Still, receiving standing ovations multiple times.  Look for more details on those songs when that recording is reviewed here soon.

Song highlights: Jesus Saves, Touch of the Master’s Hand, Then I Met the Master, Happy Rhythm 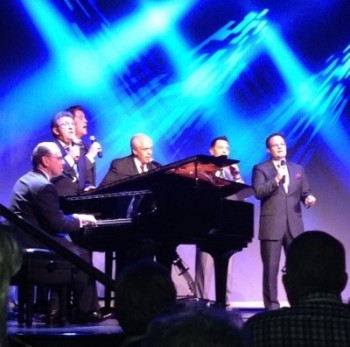 It really goes without saying that the Cathedrals Family Reunion program was thrilling and memorable.  They sang most of the tracks from their recent studio recording, and also did an extended set of songs accompanied only by Wolfe’s piano and Trammell’s bass, including some they probably don’t do often or at all, like “I’m Gonna Live Forever” and “Sin Will Take You Farther”.  Call me old-fashioned, but the piano/bass portion was the best part, and I think a lot of the crowd (and participants) would agree.

Song highlights: We Shall See Jesus, Master Builder, He Made a Change, Boundless Love 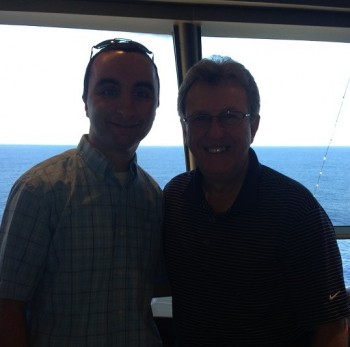 Danny Funderburk is my all-time favorite tenor, so it was a thrill to get to meet him and to hear him sing in person for the first time.  He mostly sang during the Cathedrals Family Reunion sets, but also sang several songs on his own, including his father’s masterpiece, “Whiter Than Snow”.   Another highlight was Legacy Five bringing him on to help sing “For What Earthly Reason”.  In possibly the most memorable single performance of the week, Funderburk teamed up with Trammell, Scott Fowler, Pat Barker, and a young man with Down syndrome attending the cruise, and absolutely tore the place apart with “I’ve Just Started Living” on the last night. 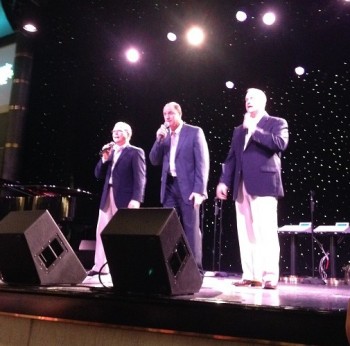 If you are even an occasional reader of this blog, you probably can tell I’m a big Greater Vision fan, so it’s always a highlight for me to be able to hear their signature deliveries of some of the most meaningful songs in gospel music.  They were the only group on the cruise that I had heard elsewhere recently, so most of their sets were familiar.  That didn’t, however, make them any less enjoyable.  Chris Allman singing “I Know a Man Who Can” never fails to be exciting, and Wolfe’s rendition of “Until You’ve Known the Love of God” is a moving recent addition to their repertoire.

Song highlights: Until You’ve Know the Love of God, I Know a Man Who Can, A Mighty Fortress Is Our God, I Could Never Praise Him Enough 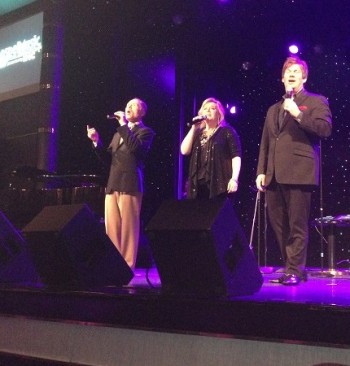 I’m quite certain it was the first time for nearly everyone on the cruise hearing the brand new Jim Brady Trio, and anticipation was high.  Consider expectations exceeded.  They thrilled the audience with eight strong selections from their new recording throughout the week.  Tim Parton fits with Jim and Melissa like a glove, vocally and otherwise.  This group is not just someone’s bright idea…they already belong with the top artists in the genre.

Song highlights: Steppin’ Out in Faith, The Greatest of All Miracles, The Love of God 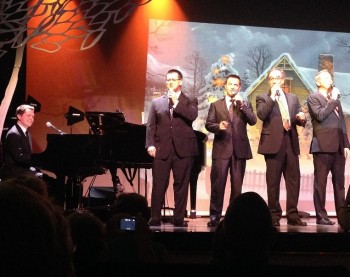 Legacy Five turned in their usual, consistently solid sets all week.  Much time is spent picking on young pianist Trey Ivey, but a lot of time was also given to showcasing his immense talents, and not only at the piano.  His vocal performance on “Getting Ready Today” is always a treat.  They delighted the crowd with several selections from their most recent recording, Great Day, and also by reaching back for some L5 classics like “I Found Grace”.  Their “Truth Is Marching On” closed out the week with a triumphant flourish.

Song highlights: Truth Is Marching On, Christ Is Still the King, Getting Ready Today 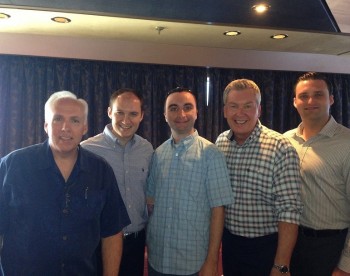 I can make the same comments here that I did about Greater Vision: I’m a Mark Trammell Quartet guy, so I obviously considered their sets a highlight.  It was the first time for me hearing them stage material from their Your Walk Talks recording, which was my 2014 Album of the Year.  It was also my first time seeing them with tenor Dustin Black and bass Randy Byrd, who are great fits with the group.  This quartet is just as solid as they come, and have a very strong stable of song material to work with nowadays.  Their performances of the big Lari Goss ballads from their Lifetime recording are always stirring, but I equally enjoyed their new, outstanding quartet songs.

Song highlights: The King Is Coming, Too Much to Gain to Lose, When the King Comes to Claim His Throne, I’ll Take It to the Grave, God’s Been Faithful 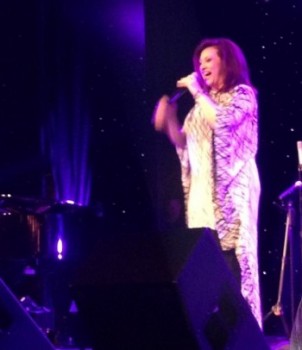 This was my first time seeing TaRanda sing in person, and I can say that yes, that voice is real.  She climbed into the rafters on several new songs, and a few selections drawn from her days with the Greenes.  Her inclusion on the cruise roster as a powerhouse soloist was an effective change-of-pace from all of the more traditional quartets and trios.

Song highlights: I Walked Today Where Jesus Walked, When God Has Another Plan 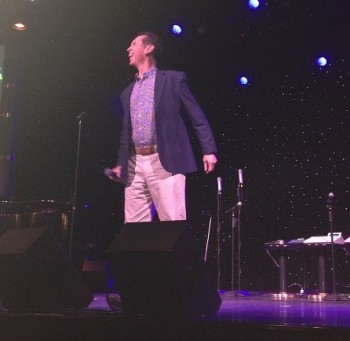 The multi-talented musician and comedian showed up in various capacities throughout the week, always to the crowd’s delight.  I knew he was funny, but was further reminded about how talented he is as a musician, both with a guitar and piano.  Probably my favorite of his contributions was his story and performance of “Old Convention Song” during the songwriter showcase. 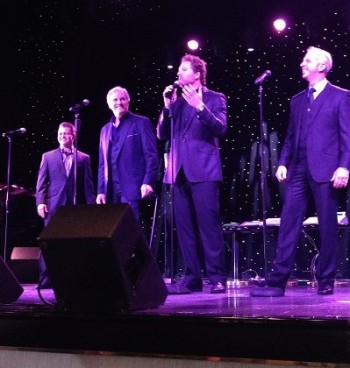 Like the Booth Brothers, I had only seen Triumphant during short NQC sets.  This more extended listening opportunity showed me how effortlessly they seemed to excite the crowd.  I honestly can’t put a finger on specifically what it is, but something about the way they operate on stage is electric, and their extended reign as Quartet of the Year attests to that.  I very much enjoyed a set of four acoustic songs they did with Lovelace on guitar, but the highlights of their sets were the hard-driving quartet songs.

Song highlights: Saved by Grace, When the Trumpet Sounds, Because He Loved Me

I would recommend to anyone, if they get an opportunity, to go on a gospel music cruise.  And the Gospel Music Celebration does it right.  They will be heading to Alaska this summer, and to the Caribbean again next January, so think about it!  Visit IMC Concerts for more information!