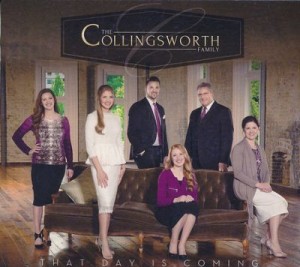 I have not been able to write as much this year on the blog as in years past, due to church and job obligations occupying more of my time than ever.  I hope in 2016 to be able to return to the frequency of posting as in years past.  But I still listened to gospel music as much as ever, and found a lot to like.  Once again, I’d like at the end of the year share with you my favorite songs and recordings that made their way into my collection this year.  If last year was the year of the quartet, with the Mark Trammell Quartet and the Kingsmen dominating my favorites, this year is the year of the family groups.

There is no doubt that the Collingsworth Family is at the top of their game, setting the bar for excellence in gospel music very high.  The honor for my Song of the Year goes to the majestic ballad “When He Carries Me Away,” from their outstanding That Day Is Coming recording.  Written by Rachel McCutcheon and Adina Bowman, the lyric, melody, and soaring Wayne Haun arrangement combine to give the listener the feeling of being “carried away” to a truly heavenly place.  Kim Collingsworth delivers one of her best vocal performances, which is saying a lot, and the rest of the family produces that signature wall of sound that sets the Collingsworths apart from most other groups.

McCutcheon had a strong showing on my favorite song list, with three selections out of the twenty.  Dianne Wilkinson, who had the most on my list in 2013 and 2014, also had three.  But they were both bested by Rebecca Peck, who, mainly due to the stellar Mylon Hayes Family recording Devoted, composed five songs in my year-end list.  Therefore, Rebecca Peck is my 2015 Songwriter of the Year.

See below for my the full list of my top 20 songs of the year.

*I am counting the Booth Brothers’ Still recording in 2015 for the purposes of this year in review, since it came out so late in 2014, and I didn’t get it until late January.