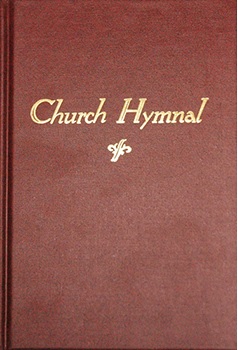 It may surprise you that I’m a relative new-comer when it comes to southern gospel music, at least in some aspects.  Less than a decade ago, if you had mentioned Gold City or Legacy Five to me, I would have been as likely to guess that they were movie titles as singing groups.  Though I didn’t grow up with a treasure trove of gospel CDs, or with my radio tuned to a gospel station, I knew many of the songs.  I knew many of the songs because, from the time I was born, three times a week I was in church singing them and hearing them sung.  And for my entire childhood and into early adulthood, I only knew one songbook.

My church was one of many Baptist churches in the Southeast that utilize the Church Hymnal, known everywhere as the “Red-Back,” for congregational and choir singing.  I am no scholar on the history of this hymnal.  But what I do know is that it was published in 1951 by Tennessee Music & Printing Company, now Pathway Press, which is the publishing arm of the Church of God based in Cleveland, Tennessee.  (Pathway Press still sells them like hotcakes!)  It contains standard hymns, traditional gospel songs, and even Christmas and patriotic numbers.  But what sets it apart from many hymnals used in churches today are the convention songs.  The first 150 or so pages of the Church Hymnal are an all-star roster of some of the greatest quartet and convention songs to come out of the 1930s and 1940s, written by giants of the genre like Albert Brumley, Vep Ellis, Luther Presley, Lee Roy Abernathy, and others.  This is the music I cut my teeth on, and the music I still love today.

I’ve been thinking recently about the impact this songbook has had on my Christian life, and the impact it has had on gospel music at large.  Both are quite immeasurable.  But that doesn’t mean I can’t try!  I decided to look at my personal gospel music collection, some 16,000+ tracks strong, and see just how pervasive therein are the songs of the Church Hymnal.    If you don’t like numbers, you may get a little overwhelmed.  But my statistical nerdiness extends to everything that interests me, including gospel music, so buckle up! 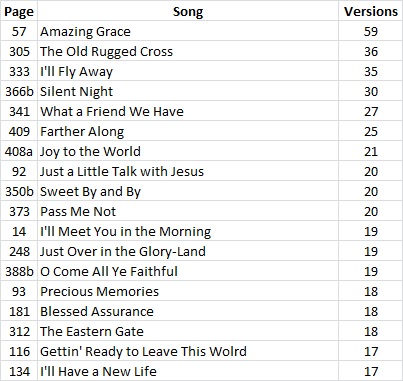 The 410 pages of the Church Hymnal contain 429 songs.  (Now is a good time to mention one of the book’s idiosyncrasies: the pages are numbered, not the songs.  Some songs cover two pages, while some pages contain two songs.  If you’re told to sing 382, for example, you’ll need to be told which song!)  Of those 429 songs, 244 are represented in my personal music collection.  See the chart to right to see which songs are the most popular.  The least surprising thing you’ll read in this post is that I have more versions of “Amazing Grace” than any other song in the Church Hymnal (or any other song, regardless of book).  Also listed are the Christmas carols that just about every southern gospel group has recorded at some point.  The remainder are classic hymns and gospel songs, most of which you can probably sing without much of the book’s help! 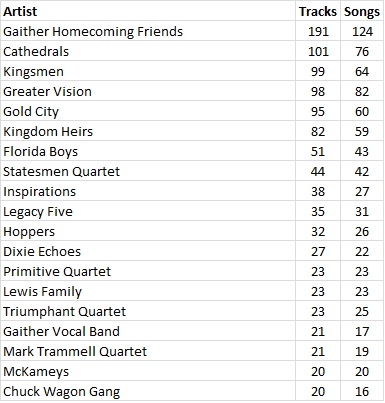 The column titled “Tracks” contains the total number of recordings the group has made that are (or that contain in medley form) songs from the Church Hymnal, including duplicate versions.  The far right column “Songs” contains the number of unique such songs recorded by those groups, that I have in my collection.  So on Gaither Homecoming albums that I have, 124 different songs from the Church Hymnal have been recorded, a total of 191 times.

This list contains many of the longest-lasting and most popular groups on the history of southern gospel music.  They’ve recorded a lot of songs in general, not just a lot of songs out of one songbook.  It’d be perhaps more interesting to see which groups most frequently record them.  Oh, wait, I have that, too!

Now there’s an eye-opener!  I don’t believe any individual in gospel music today has done more to promote and preserve the legacy of the Church Hymnal than Gerald Wolfe.  If you go to enough Greater Vision concerts, or listen to Gerald talk enough, you’ll hear something about the red-back.  I’ve heard Gerald rattle off page numbers of songs off the top of his head, a skill that I share with him, though he would probably whip me in a “Church Hymnal Drill”.  Greater Vision doesn’t just talk about the hymnal…they bank on it, with their music.  They recorded four albums over a period of nine years (the “Church Hymnal Series”) that contain 50 total tracks, recorded with delightful, straight-up arrangements that remain true to the “book”.  Even besides the dedicated series, Greater Vision has recorded plenty of them scattered on other albums.  The result is that their percentage of Church Hymnal songs is significantly higher than anyone else’s.  The Kingdom Heirs, third on the list, have recorded three “red-back” exclusive projects themselves.  I would attribute the Gaither Homecoming’s high place on the list to, by the series’ nature (especially early on), recording a higher proportion of older songs in general.  I’m glad we have artists like those above who are still recording this old-fashioned music! 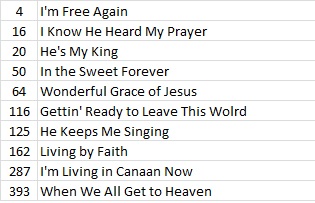 Now that I’ve given you more information than you ever wanted to know, I’d like to share some of my favorite songs from this cherished book of my youth.  See to the right for 10 of my personal favorites, in no particular order except page number.  They are mostly convention songs; I especially love the ones with lots of moving parts. 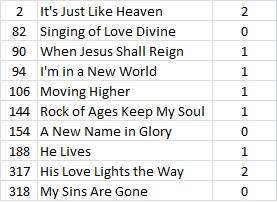 There are also songs that I grew up singing and hearing that, in conducting my research for this post, I was surprised to see how little they have been recorded, if at all.  To the left are some of my favorite “underrated” and “under-recorded” songs from the red-back.  The far right column is the number of recorded versions I have in my collection.  Any readers out there recognize them, love them, or know of any recordings I don’t have?  You never know…if the right person reads this, maybe we can add to the number of recorded versions!  Well, I can dream…

I’d love for you to share with us any special memories you have of the Church Hymnal.  Has it had an impact on you and your love for gospel music?  What are some of your favorite songs?