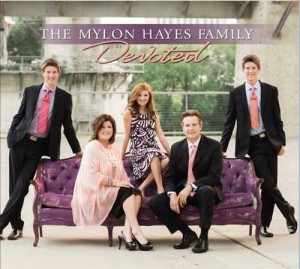 It seems impossible that it was a year ago that I was debating whether to name the Mark Trammell Quartet or Kingsmen CD as my favorite album of the year.  But here we are again, looking back at all that 2015 offered us in the gospel music world.  I’m obviously not a professional “critic” or qualified to be anything more than a fan, but I still love to bestow upon someone an “Album of the Year” title, for whatever my little opinion is worth.

This year, the decision was not difficult.  One album clearly stood out among the others, and it was from a group that had never before appeared in my year-end rankings.  When I bought the Mylon Hayes Family’s Devoted, I fully expected to enjoy the recording, because of exposure I had to their music online.  But I did not expect to be blown away like I was.  Because I believe so much in what the Mylon Hayes Family is doing, I’ve never been more pleased to put a CD at the top of my list of favorites.

Devoted has it all: fantastic convention-style singing, orchestrated ballads, hard-driving uptempo songs, and quieter meditative numbers.  Mylon, Wendy, Conner, Bailey, and Kennedy execute those songs with a talent clearly honed through expert training and hard work.  A lot of the credit also goes to Rebecca Peck, who penned more than half the tracks on the album (four co-written with Dianne Wilkinson).  It was my only 5-star album reviewed this year, and was as close to perfection for me as you can get.

With that, I give you my list of top ten albums of the year.  Thanks for reading this year, and I hope you’ll continue to honor me with your presence on the blog in the year to come.