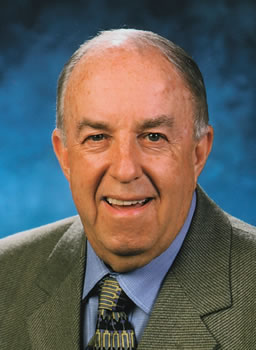 We started off the Now Featuring… series with the great Glen Payne, and it only seemed appropriate to follow that up with the other half of gospel music’s greatest pair.  I called Payne the greatest lead singer in gospel music history.  Believe it or not, I think an argument could be made that for 35 years, the Cathedrals had the two greatest lead singers in the genre’s history in the quartet at the same time.  Of course, George Younce was the bass singer.  But if you define “lead singer” as the singer who sings the melody, how many sang a melody better than Younce?  Not many, if any.  He had it all: a smooth upper register, an emotive delivery, charisma, and genuineness.  That’s why you can come up with a far greater list of feature songs for Younce than for any other gospel music bass.

George Younce sang with the Weatherfords (not at the same time as Payne) and the Blue Ridge Quartet before getting the call to make the Cathedral Trio a quartet in 1964.  He would hold this position until the group’s retirement in 1999, after which he continued touring with the Gaither Homecoming crew, and recorded two projects with the Old Friends Quartet before his death in 2005.  I’m not sure there is a more beloved figure in all of gospel music history; I’ve never heard or read even a hint of a negative thought about him.  His Christian character and love for people was on par with Glen Payne’s.  The only difference is that Younce had the more outgoing and vocal personality, which he used on stage to endear himself to gospel music fans like few others.

All of my top 10 Younce features come from Cathedrals recordings, as you might expect.

Now, it’s your turn.  What are you favorite George Younce performances?  I love to hear comments from folks honoring the memory of these great Christians, so please share with us!