Triumphant Quartet – Because He Loved Me 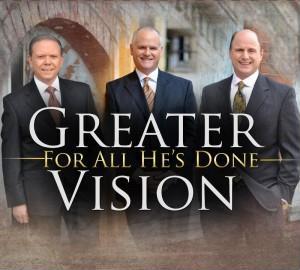 In the southern gospel world, you can’t get much more solid than Greater Vision.  The personnel is stable (only 6 group members in 22 years, and almost 50 years of total Greater Vision tenure among the three current members).  The leadership and purpose are consistent.  Most importantly, the songs are relatable, accessible, and Biblical.  For all of these reasons, Greater Vision releases garner high expectations, and rarely fail to deliver.  Such is the case with their brand-new release, For All He’s Done.

The current Greater Vision lineup having been together for the last three years, it’s clear what the major assets are for this version of the trio.  They know what those assets are, and they are on display in their recordings.  Let’s look at these assets, and how they are utilized to create another quality album.

I believe that, without question, especially in the last 15 years, Greater Vision’s greatest asset is having a consistent source of great songs “in-house”.  Rodney Griffin is one of southern gospel’s most prolific and consistent hit-makers, and has been for a decade and a half. Chris Allman is a great songwriter in his own right, and, since re-joining a few years ago, has added another dimension to Greater Vision’s song repertoire.

Griffin is a master of the Biblical narrative, and has an extraordinary and God-given ability for taking a simple, Scriptural truth, and wrapping it in a unique, interesting, and memorable package.  The two most energetic tracks on For All He’s Done are also my two favorites, and both are Griffin’s.  “Looking for the Grace” (not coincidentally, the first radio single) is one of the best uptempo songs Greater Vision has recorded in the last several years.  It’s fun and catchy, but don’t let that distract from the depth and maturity of the lyrical theme.  “Preacher Tell Me Like It Is” has the kind of hook you might expect from Dianne Wilkinson, but with Griffin’s signature style of personal application, and a nice country track.  In today’s world of so-called preachers tickling the ”itching ears” of the masses, we can’t get enough of this message.  On the slow side of things, “This Is Mercy” is his most poignant and rich composition on the album, and is another standout track.

Allman’s songs bring a different element: one of personal experience and testimony.  While Griffin tells us a Bible story, Allman often tells us his story, and by extension, our story as Christians.  The album closer and title track, “For All He’s Done” was a standout from his solo recording (reviewed here last year), and is a great fit for Greater Vision.  If you really don’t like big background vocals, you may have an issue with this track, but otherwise it delivers as a powerful praise anthem.  “I Can Trust You” is another quality example of writing in the first person, giving a personal perspective on the relationship with Christ.  Greater Vision made a good decision to bring back “The Blood Hasn’t Ever Changed,” which they recorded just after Allman left the group in the mid-90s.  Though it was originally recorded without him, the song was Allman all the way, with a nice head-bobbing groove.  The arrangement on For All He’s Done is very similar to the original, only with Chris taking the verses instead of Gerald.

From an individual vocal standpoint, Allman is now the group’s greatest asset.  I believe he is the best tenor in gospel music, and is on the short list of greatest singers, regardless of vocal part.  One only has to look at the number of features he gets to know that Greater Vision recognizes this.  After getting seven features on their previous release, The Only Way, he gets five more on For All He’s Done.  On songs like “For All He’s Done” and “The Blood Hasn’t Ever Changed,” he combines smoothness and feeling in the verses with effortless power to carry the choruses.  And when they need someone to really “take it home,” Allman is the man for the job.  “Seeking for Me,” a Lanny Wolfe cover pulled from the Cathedrals discography, has an exquisite arrangement that is moving and quiet throughout, except when Chris soars in the second verse, making for an exceptional track.  (Here is a good place to mention Lari Goss, and his gorgeous work on the orchestral arrangements, particularly on this track and “This Is Mercy”.)

Six paragraphs in, I have barely mentioned the man at the head of Greater Vision, and in the producer’s chair on For All He’s Done.   The other of the group’s greatest assets is the musical acumen and vision of Gerald Wolfe.  Much as he does on stage as one of the genre’s best emcees, he knows the right musical buttons to push for this group of singers, at this time.  He’s an all-time vocal great, but no longer is Wolfe’s the voice that carries the trio’s sound.  In fact, on For All He’s Done, he only gets one verse of one song as a solo.  (On no other major Greater Vision recording has he gotten fewer than 2 features, and he has almost always gotten at least three.)  He fills Glen Payne’s shoes on the first verse of “Looking for Me,” and does so beautifully, in a low range.  Though his individual voice isn’t the focus, however, Wolfe’s hand is evident throughout the recording.  Greater Vision is generally not about huge, high endings and loud, hard-driving numbers, though they can do those when they want.  As producer and leader, Wolfe delivers what they do best: bringing meaningful gospel truth to their listeners in a comfortable and pleasing package.

As a result, For All He’s Done isn’t the kind of CD you pop in for stereotypical “driving” music, or when you’re hungry for those big, dramatic musical moments.  Only one song on can be really classified as “fast” and there’s no huge, formulaic power ballad.  Honestly, I’m the type of fan who really likes the fast stuff and the big stuff, so I might have preferred substituting one of the several low-key, country-tinged songs for a more energetic one.  But this recording isn’t about knocking anyone’s socks off.  Instead, this is a CD you will want to listen to in those peaceful times, maybe on your front porch, when you want to contemplate the goodness of God.  That’s something we all could stand to do a little more of, and there’s no better way to do that today than with some Greater Vision.