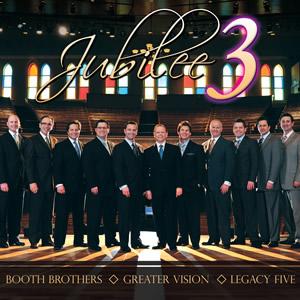 I know the latest release by the “Jubilee” gang is not brand new at this point, but among recordings of 2012 I have not reviewed yet, it is my favorite, so I thought I’d go ahead and get a review in before the end of the year.

By now, the Booth Brothers, Greater Vision, and Legacy Five know the formula that works best for their joint venture.  The first Jubilee recording was comprised mostly of songs either sung by all three groups together, or songs featuring one of the individual groups.  For Jubilee 3, most of the songs feature individual members of the three groups, put together to form a “scrap iron” trio or quartet.  Gerald Wolfe and the other guys have clearly listened to the fans and given them what they want.  The song listing on the CD packaging adds humor by giving each “group” a name, like the “Tin-Ears” (the three tenors), the “Barely-Tone” (the baritones) and the “Dream On Quartet” (composed of…good looking guys?)

The other aspect of Jubilee 3 that makes it the best recording yet in the series is the song selection.  There are still old standards present, but several new songs, or songs not commonly recorded, give this album more depth than previous Jubilee releases.

To me, the anchor of the album is “The Galilean,” which was new to me when I heard it live at the NQC Jubilee Showcase.  I have since learned that it was recorded by the Singing Americans with Danny Funderburk featured (and by some others since).  It sounds like no other song I’ve ever heard before, starting softly, but then transforming to a power ballad by the end of the chorus.  Gus Gaches and the rest of the “Brunette Quartet” (Ronnie Booth, Wolfe, and Glenn Dustin) knock it out of the park.

The best of the new songs is a beautiful Jim Brady composition called “Every Cry Is Heard”, which Jim sings with Wolfe and Gaches.  It’s a great message in a simple, but graceful musical package, encouraging the listener to sing along.  The pace is much quicker for “Treasures in Heaven,” a catchy new Rebecca Peck tune sung by the “Tin-Ears,” anchored by Chris Allman.  Allman (“There’s a Better Day”) and Rodney Griffin (convention-style “Still Trusting in the Blood”) join Brady in contributing new songs from their pen to the project.

The balance of the songs should be mostly familiar to southern gospel fans.  It’s hard to go wrong with “Wedding Music,” and the rendition found here is no exception.  It’s the first studio recording of the song to feature Chris Allman in the finish, who for my money, sings it better than anyone.  “Gettin’ Ready Today” is a fun song and contains a surprise vocal feature from Legacy Five pianist Trey Ivey.  It calls to mind Roger Bennett’s features with the Cathedrals and Legacy Five.  “Beautiful Home,” featuring the entire Jubilee “choir” is a terrific rousing CD closer.

The one song that is out of place on the recording is “How Much More,” which is a feature for former Legacy Five bass Glenn Dustin.  The performance is fine, but the fact that Dustin and the quartet parted ways soon after the project’s release lessens its impact.

Obviously, if you love the Booth Brothers, Greater Vision, and Legacy Five, you will definitely want this project.  In fact, you probably already have it.  While the first two Jubilee recordings were interesting and fun because of the dynamics of the collaboration, the music on Jubilee 3 , even more than the others, stands on its own merits, regardless of the novelty of the set-up, as a quality southern gospel recording.