The Collingsworth Family have been on a steady climb in the gospel music field for several years, a climb that has culminated in them winning Favorite Mixed Group the last two years at both the Singing News Fan Awards and the NQC Music Awards.  Amazingly, each of the last four winners of the Favorite Young Artist Singing News Fan Award has been a different Collingsworth sibling, taking home the award in perfect order of birth: Brooklyn in 2010, Courtney in 2011, Phillip in 2012, and Olivia in 2013.  All of the Collingsworth “children” are now at or near vocal maturity, coinciding with the peak in popularity and impact the family has attained.  Each of the previous Collingsworth Family recordings have traced their musical development, and this year’s double-release of The Lord Is Good and Hymns From Home showcases them fully developed as one of the  southern gospel’s most outstanding groups. 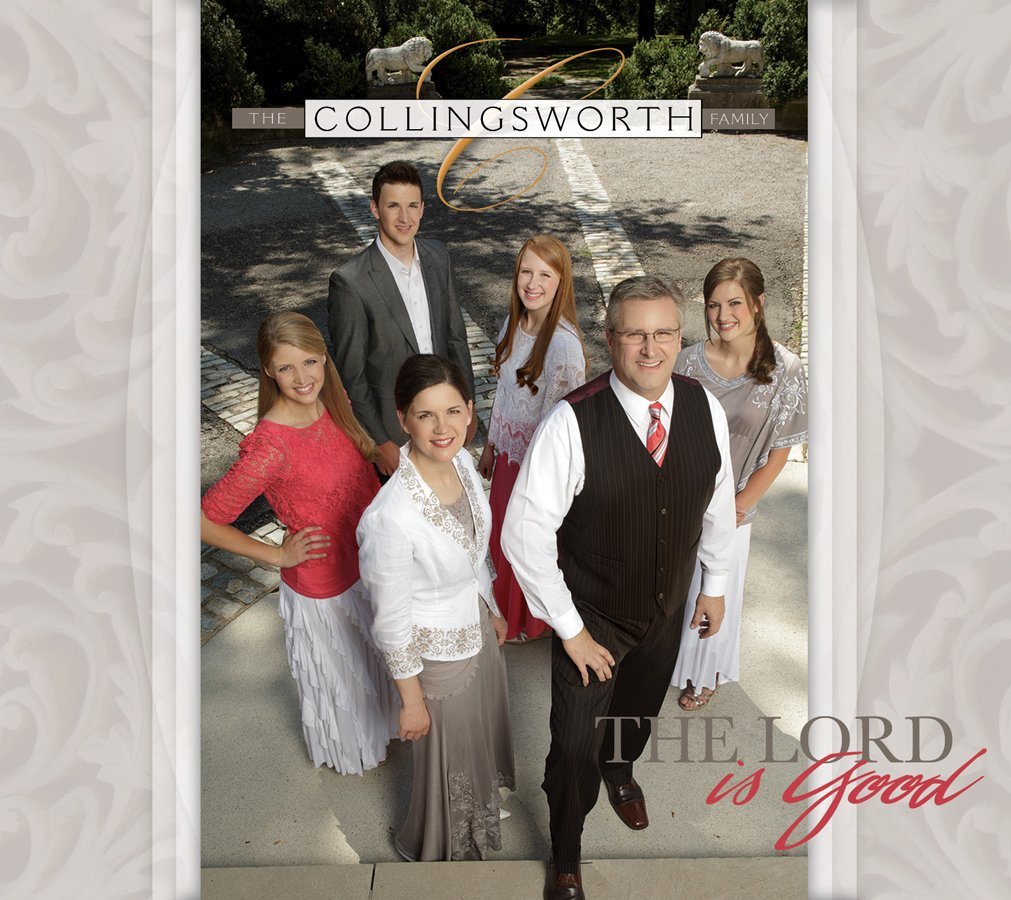 The Lord Is Good is the Collingsworth Family’s second mainline gospel release for Stowtown Records.  Like their previous recordings, it is a showcase of tight family harmonies and impressive arrangements with an inspirational lean.  In southern gospel, only the Gaither Vocal Band rivals the sonic quality that the Collingsworths consistently produce, and that is no different on this album.

For me, Collingsworth recordings have always been highlighted by soaring power ballads and exquisite softer ballads, with the uptempo songs often taking a back seat.  The Lord Is Good is their first album for which I can say that the faster songs were more enjoyable than the slower ones.  The album opener, a cover of Kirk Talley’s “I’ve Come Here to Tell You That the Lord Is Good,” is one of my favorites, with a really fun arrangement and orchestration from Wayne Haun.  Songs don’t get any more infectious than “Show a Little Bit of Love and Kindness,” a brilliant pull from the gospel music archives.  It has the potential to be one of the family’s signature songs.  “We Will Serve the Lord” is especially appropriate lyrically for a family group, and is another fun groove.  “Living in Love With the Lord” is a light jazzy tune that really takes off towards the end.

Of the slower songs, my favorite is 15 year-old Olivia’s best feature yet, “It Matters to the Master”.  She has the purest tone of any of the Collingsworths, and it sparkles on this beautifully crafted ballad.  It’s hard to go wrong when Collingsworth voices meet a Gaither song, and they combine for another great success with “I Could Never Outlove the Lord”.  The only weakness for The Lord is Good is that it doesn’t have a “home run” power ballad, like “Blessed Be the Lamb,” “Fear Not Tomorrow,” and “Resurrection Morn” from their preceding albums.  The closest attempt is “How Great His Love,” which, while very good, doesn’t quite measure up to those others.  Indeed, I’m inclined to agree with Daniel Mount that the bridge of Donnie Sumner’s “Love Found a Pardon” is so good, it makes me wish they had just recorded that whole song.

While The Lord Is Good doesn’t break new ground for the Collingsworth Family, it is worthy of the exceedingly high expectations the family has established for themselves.

Alongside the mainline release of mostly new songs, Hymns From Home offers a contrast of classic songs and relatively simplified instrumentation.  Recorded live from the “Collingsworth Homeplace,” it contains eighteen hymns of various styles and levels of familiarity, put in the capable care of the Collingsworth voices and instruments.

If The Lord Is Good doesn’t contain any jaw-dropping moments, Hymns From Home makes up for it with at least a couple.  Months ago, the family posted a video of them rehearsing “Burdens Are Lifted at Calvary,” setting expectations high for the upcoming recording.  The rendition does not disappoint, with some of the most exquisite harmonies you will hear, accompanied only by Kim on piano.  And that’s not even my favorite song on the album.  For “O Worship the King,” Brooklyn and Courtney join Kim vocally and instrumentally, with their violins, for an absolutely breathtaking performance.  I nearly gave it a standing ovation the first time I listened to it, which is saying something considering I was driving at the time.

The recording’s other main highlight for me, and biggest surprise, is the only song I had never heard of before listening to the project.  I love uptempo hymns, and “Covered by the Blood” is a pure delight.  I believe it’s Brooklyn, Courtney, and Phillip stepping out and taking the last verse to a rousing finish.

Speaking of Phillip, it’s worth mentioning that he is featured heavily, both on this album and on The Lord Is Good.  The Collingsworth release from two years ago, Part of the Family, was a breakout album for him individually.  Fast forward to the end of 2013, and he is undoubtedly an anchor of their sound, and one of the most impressive young vocalists in gospel music.  On “The Love of God,” alongside his sisters, and on “The Lord’s Prayer,” where he flies totally solo, 19 year-old Phillip shines.

Hymns From Home may have a couple too many songs the family has already recorded, with the same arrangement (by my count, four of them), and I would personally be OK with one or two fewer instrumentals (there are three).  But from beginning to end, it is a beautiful showcase of some of the greatest songs ever written, performed by one of the few groups who can do them justice.