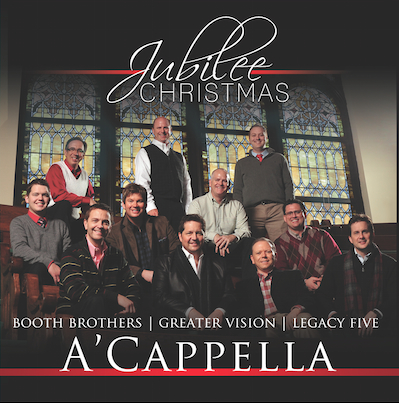 Undoubtedly one of the most successful collaborations of the last few years in gospel music has been the Jubilee series of concerts and recordings, including southern gospel stalwarts the Booth Brothers, Greater Vision, and Legacy Five.  That collaboration continues this Christmas with a tour, a DVD, and a studio recording.  The Jubilee Christmas A’Cappella recording is an EP consisting of six a cappella tracks arranged by Lari Goss, with an assist from associate producer Trey Ivey.  It is a mixture of sacred and secular songs; thankfully as far as I’m concerned, Santa, Rudolph and Frosty are absent. *wink*

As you would expect with Goss at the controls, the arrangements are intricate, with plenty of key changes and stylistic variation.  One great thing about having three groups involved is that obvious stacks are not needed to fill out these big arrangements.  The most fun track is “Jingle Bells,” which is given a festive, jazzy treatment.  On the other end of the spectrum is the most powerful number, the “Angel Medley” including the standard “Angels From the Realms of Glory” and “Angels We Have Heard on High,” and the less standard “Birthday of a King,” which takes the song home with gusto.  The closer, titled “The Benediction,” is a short but exquisite track using the last line of “White Christmas,” which serves as an effective closing blessing on the listener.

Since it is an EP of all a cappella tracks, Jubilee Christmas A’Cappella is very short, clocking in at a total of just over 11 minutes.  As such, the best use of funds is probably to get the current special, in which the CD comes free with the purchase of the Jubilee Christmas DVD.  I can’t think of a better way for a southern gospel fan to get into the Christmas 2013 spirit than with the Jubilee gang.