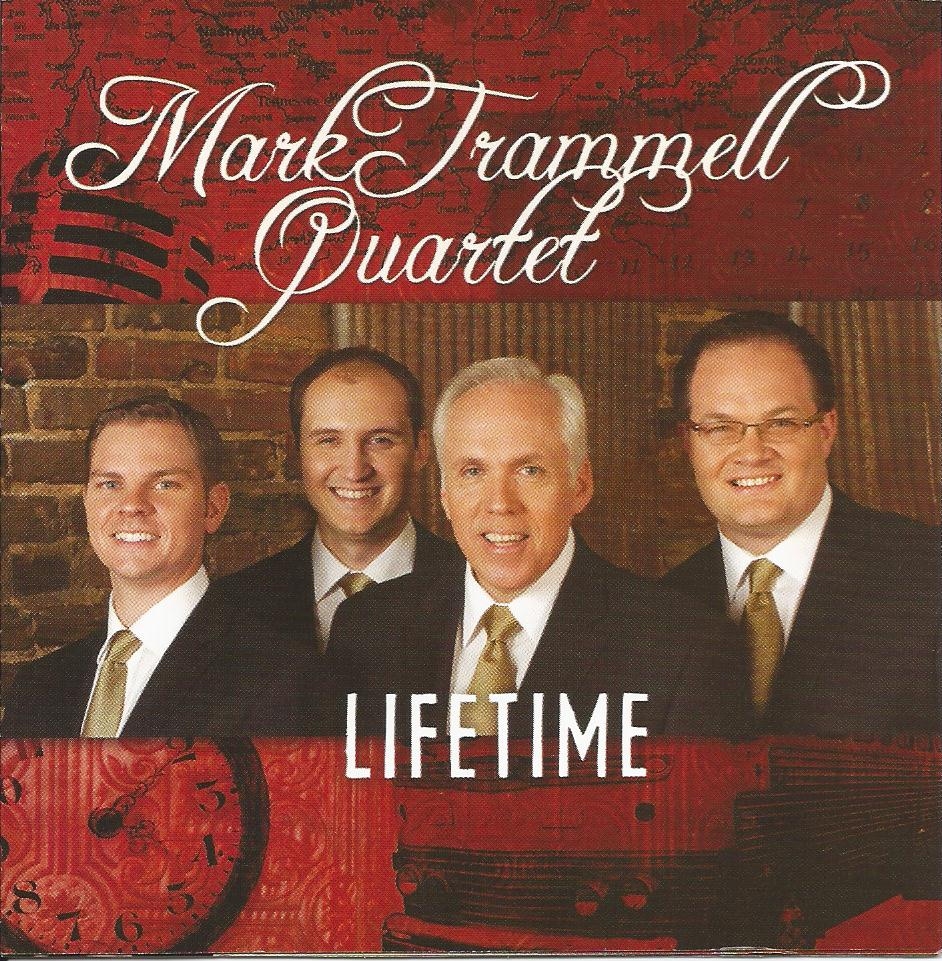 Since their last recording, the Mark Trammell Quartet has had changes at tenor (Eric Phillips re-joining to replace Joel Wood) and recently, at lead (Nick Trammell replacing mainstay Dustin Sweatman).  It was about time for one of gospel music’s best-sounding quartets to come through with a big recording, and with Lifetime, they have surely done that.

Lifetime is a huge recording, but not because it’s filled with potential new hits.  On the contrary, there is only one new song on the entire project.  As the title indicates, the songs were chosen to trace a lifetime in gospel music by Mark Trammell himself.  In the liner notes, Mark tells of the impact these songs and their singers have had on him, from his earliest memories until today.  Don’t be fooled, however: you may have heard most of these songs before, but you’ve never heard them like this.  Enter Goss.

The legendary Lari Goss joins Mark in the producer’s chair for the second consecutive Daywind release by the quartet.  While 2010’s Testimony was designed as a laid-back, throwback kind of project, on Lifetime, all of the stops are pulled out for Goss.  Mighty orchestrations are prevalent throughout, and in my opinion, this is some of his best work of recent years.  It wasn’t until I listened to the project with a good set of headphones that I really grasped just how intricate and powerful some of these arrangements are; my car speakers didn’t cut it. 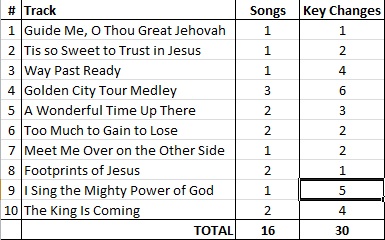 The arrangements give the singers quite a workout.    MTQ fans will remember the “Calvary Medley” on the Testimony project.  On Lifetime, there are several medleys and other uses of multiple songs.  In fact, on the project’s ten tracks, sixteen total songs are used.  And there are a mighty lot of key changes…30 to be exact, not counting modulations during the song intros.  See the chart to the right for a breakdown of the songs and key changes used on each track.  Not all of these are simple half-step key changes, either.  There are some doozies.  The degree of singing difficulty is quite high, but arguably the most vocally capable quartet on the road today proved their worth in a big way.

Two of the most striking orchestrated arrangements belong to the two songs noted as being influences on Mark via the Couriers.  The project opens with a stirring rendition of “Guide Me, O Thou Great Jehovah”.  Goss gives it an exciting modern groove, including some cool bass guitar.  It sounds quite different from the version popularized by Gold City on Within the Rock.  The same is true for “I Sing the Mighty Power of God,” which gets a makeover from the well-known Greater Vision/Couriers arrangement.

The other three big orchestrations are of the power ballad variety, all of which feature Mark in the verses.  Among them, the best is an emotional take on “Too Much to Gain to Lose”.  If the listener is wondering just what is to be “gained”, it is answered by the insertion of a moving chorus of another Dottie Rambo classic, “We Shall Behold Him,” featuring Pat Barker.  Similarly, two Gaither compositions are combined in the project closer, “The King Is Coming,” which utilizes a chorus of “I’m Free” for a triumphant finish.  The project’s longest track is the “Golden City Tour Medley,” which starts with a rare gem, “We’ll Tour the Golden City,” followed by “Touring That City” and “I’ll Meet You in the Morning”.  None of these three songs would come to mind as power ballads, but are expertly crafted together in that format here.  (Bonus note: listen for a rare, high B-flat from Mark in the middle of the song)

If the entire project were composed of those big songs, the listener would be completely worn out halfway through.  But five less weighty songs are evenly spaced throughout to break them up, giving the project an excellent pace.  These songs are among my favorite cuts.  The lone new song is one an experienced southern gospel music listener will quickly recognize as a Rodney Griffin tune.  “Way Past Ready” is a hard-driving uptempo number that is a likely radio hit, and pure fun.  Pat Barker is turned loose on a cover of “Everybody’s Gonna Have a Wonderful Time Up There”.  For all of the big orchestrations we’ve covered, this might be Goss’s best work on the album.  Honestly, I’ve never particularly cared for the song, but this arrangement and track is so good, it’s probably my favorite cut on the album anyway.  It is by far the best and most energetic version I’ve heard, and the rousing chorus of “There’ll Be Shouting on the Hills” added fits like a glove.  The last of the fast songs is an old Happy Goodmans number given a straight-ahead country arrangement.  “Meet Me Over on the Other Side” is an absolute delight of good quartet singing.

Two poignant and mellow arrangements round out the project.  “Tis So Sweet to Trust in Jesus,” featuring Eric Phillips, stays quiet, but showcases one of the most intricate musical and vocal arrangements on the album.  Finally, “Footprints of Jesus,” which is cited as an invitation hymn in one of Mark’s earliest memories, is given a smooth and quiet arrangement befitting that memory, with a very nice chorus of “Where He Leads Me” included.

There are some potential weaknesses with the recording I could quibble with.  Newest member Nick has no vocal solos, which is understandable given the timeframe of the recording; he’ll get his on the next project, I’m sure.  Some fans might think there’s a little too much heavy orchestration, and there is a spot or two where I might have scaled it back some.   And the fact that there is only one new song may be a turn-off for fans who like to see groups record new material.

But this project does what it sets out to do, with resounding success.  Songs of a lifetime are majestically and powerfully performed, as they’ve never been done before.  While the obvious theme of the recording is the sharing of songs from the heart and life of Mark Trammell, I see an overarching theme with the message of the songs, that may or may not be intentional.  Half of the songs look back on the life of a Christian and speak of the ever-present and mighty hand of God guiding every step.  The other half look forward to the day when He calls the Christian home.  In that way, these aren’t just songs of Mark Trammell’s lifetime.  For us Christians, these are songs of our lifetimes.