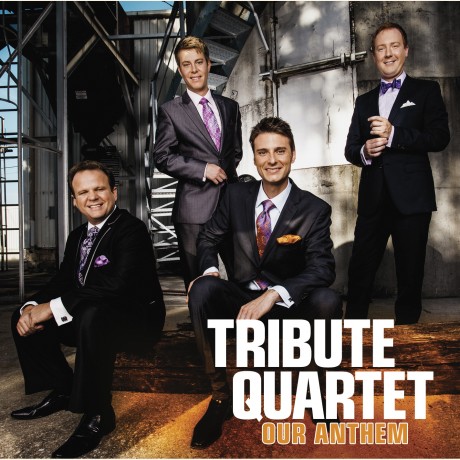 Tribute Quartet is one of an increasing number of talented groups on the cusp of breaking through to that first tier of southern gospel artists, and the widened scope of influence that goes along with it.  With their latest release, Our Anthem, they may have done just that.  Steve Hurst is credited as vocal coach in the album credits, and it is clear that these singers have worked hard to improve their craft in the past year.  Tribute sounds better than ever, and on this recording, they have the songs to back it up.

The clear highlight of the recording is the thrilling Dianne Wilkinson/Jerry Salley composition, “Good News From Jerusalem”.  Others have compared it to “He’s Alive” and “My Name Is Lazarus”.  The first song it brought to mind for me was “We Shall See Jesus,” only with a much quicker tempo.  Three solo verses by baritone Josh Singletary set a somber mood before the chorus joyously bursts forth with the “news” of the Resurrection.  What this song has that none of the referenced comparisons do is another verse and chorus, with an application to the Second Coming.  “Good News From Jerusalem” is one of my picks so far for the best recorded songs of 2012.

While no other song on Our Anthem approaches that level for me, the remainder of the project contains a very good balance of ballads, mid-tempo, and uptempo songs, with not a noticeably weak number among them. Tenor Riley Clark sounds better than ever before on the album’s best power ballad, “The Song of Heaven,” and its best fast song, the cover of the old-school Talleys’ “God’s Gonna Send Revival”.  Even a little better than both of those to me is the tender “He Loved Me Anyway,” a Gary Casto feature with a bridge of George Amon Webster’s “He Loves Me”.

Not to be outdone by the other members, bass Anthony Davis shines in several spotlight moments.  He leads a well-executed cover of “Leavin’ on My Mind” and also gets a solo verse each in the uptempo numbers “Thank the Lord” and “With Just a Little”.  The former is one of my other favorite cuts and has a unique major/minor musical progression, while the latter is a Rodney Griffin co-write out of the same, almost child-like, mold as “Everyday People”.

The first single from the project is a Daryl Williams cover, the country-flavored “Homesick Angel”.  At first, the lyric seemed a little cheesy to me, but after thinking about Jesus telling of the beggar Lazarus being take away by angels, I recant that sentiment.  I really like the track, which is dominated by lots of great fiddle by David Johnson.

The only minor criticism I have for Our Anthem is that I would have liked one or two more hard-driving quartet songs.  This type of singing may not be considered a strength for Tribute by some, but I enjoyed examples of this from The Waiting Is Over, like “Bring on the Joy” and “He Is Leading the Way”.  “Thank the Lord” would have sounded even better as a piano-led true quartet song, but the more reserved stringed arrangement works well, too.

By all accounts the men of Tribute Quartet are a great bunch of guys, so I and a whole lot of others are hoping that Our Anthem helps to really put them on the map.  I can’t predict the future, but I can say that this is quite possibly the best quartet album I’ve listened to so far in 2012.