A glimpse of the ‘new’ Kingsmen 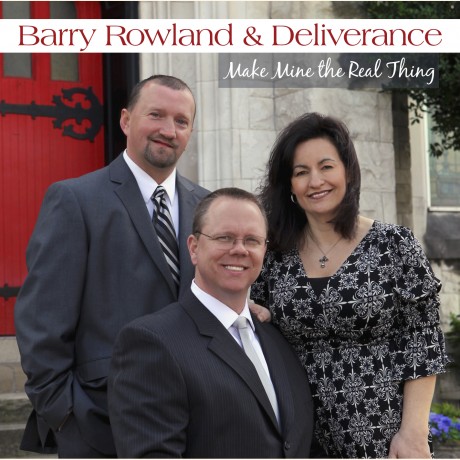 The name “Rowland” is as significant a name in the past 20-30 years of southern gospel as any other, primarily because of the songs written by Kyla Rowland.  After traveling and singing for many years herself, Kyla’s son Barry now carries the family tradition on the road, along with his wife, Tammy, and Shawn Rupert, as Barry Rowland & Deliverance.  Make Mine the Real Thing is the group’s sophomore release for Crossroads, and is their best recording effort yet.

It is no surprise at all that of the eleven tracks on the project, ten were penned by Kyla Rowland (the exception being the closing track, “One Prayer Away,” which sounds Kyla-esque anyway).  A couple of them have previous recordings I am aware of, most notably Gold City’s “God Handled It All,” but most of them were new to me.  With Mrs. Kyla featured prominently in the songwriting credits, the strength of this project is in the song quality.  Lyrically, the songs are bold in their honoring of Christ, and in their stand for old-fashioned Christianity.  Musically, there is a healthy dose of Mrs. Kyla’s bread-and-butter mid-tempo fare, but also a few slower ballads and a couple of faster numbers.  While the vocals are what some might consider “rough around the edges” in spots, I personally like their Appalachia-influenced style.  The trio blend is great, and the vocal style really makes the lyric accessible to the listener.

As a general principle, I tend to gravitate toward more uptempo songs, especially on a first listen for a project.  The four quickest songs on the album are also four of my favorites.  The opener, “He Took My Case,” is on the quick side of mid-tempo with a lyric speaking of the accessibility of our Great Physician.  Very similar in theme and sound is “What’s That for a Healer,” which emphasizes the power of that Great Physician.  Both of these “healer” songs have a bluegrass tinge.

It was a pleasant surprise to hear Kyla Rowland herself with a guest vocal on the outstanding “The Blood and Its Power,” which has an infectious country groove.  The lyric is a plea for someone to deliver an old-fashioned Gospel message about the blood of Jesus, not watered down.  I just enjoyed it the first time around, but on the second listen, I heard Mark Trammell clear as day in my mind singing this song.  If anybody associated with the Mark Trammell Quartet happens to read this, you’ve got another great Kyla Rowland song sittin’ right here for you.  Just joking about that, of course, but it is a great match, in my opinion.

The album’s most uptempo song is also probably the most familiar to listeners.  Gold City they are not, but Deliverance gives “God Handled It All” a very enjoyable treatment with an arrangement similar to that of the super-quartet.  This song is one of my all-time favorites, and they do nothing to diminish it with this rendition.

The strongest of the slower songs is “All Our Hope,” which is given a power ballad arrangement.  Anybody who thinks this trio is just some mountain singers they’ve never heard of, needs to listen to this performance, which is as good as anything a big-name mixed group may do.  Definitely not a run-of-the-mill Kyla Rowland song stylistically, it is a true standout.  With lyrics that showcase the limitless power of God in our lives, it’s sure to thrill your soul.

Two of the other strong ballads deal with Christ’s triumphant death and resurrection.  “He Crossed Out My Sin and Shame” follows a power ballad template, but, while good, never quite gets to the level of “All Our Hope”.  “But He Did” is a Daniel Mount-style “mellow” ballad with some beautiful echoes in the chorus.  It takes its lyrical cue from Paul’s encouraging words to those at the Corinthian church who were being made to doubt the possibility of resurrection (1 Cor. 15:16-20)

16 For if the dead rise not, then is not Christ raised:

17 And if Christ be not raised, your faith is vain; ye are yet in your sins.

18 Then they also which are fallen asleep in Christ are perished.

19 If in this life only we have hope in Christ, we are of all men most miserable.

20 But now is Christ risen from the dead, and become the firstfruits of them that slept.

The three remaining slow songs all deal with prayer.  I promise I have nothing against prayer!  It just happens that those three are the weakest songs on the project for me.  They all have a good message, however.  “I Can Still Pray Through” is a song of victory over Satan through the power of prayer.  “One Prayer Away” speaks about how deliverance from sin and from trials can be accomplished through a prayer.  “My Prayers Are All Over You” should appeal strongly to mothers with wayward children.

While not necessarily my favorite song on the project, the title track “Make Mine the Real Thing” is a good summary of what you get with this album.  It has a lyric that champions old-fashioned salvation and laments the advent of modernized versions of Christianity.  We should all want our Christian lives to be the “real thing,” lined up with what the Bible teaches.

Similarly, you will find no watered-down Gospel on this project.  In an old-fashioned and no-nonsense style, these are real singers singing songs about a real Savior and a real salvation.  It all adds up to my favorite album of 2012 so far.  Last year I told you to give the “new” Inspirations a chance after their outstanding release, and I’ll tell you same thing about Barry Rowland & Deliverance.  Give them, and this CD, a chance, and I don’t think you’ll regret it.