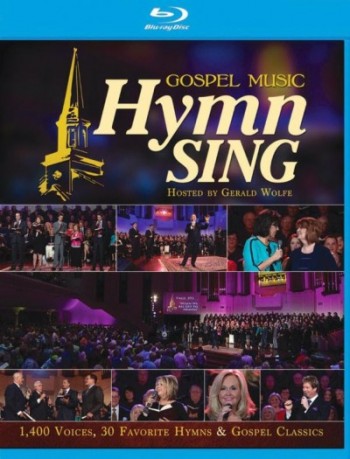 Every once in a while someone will come up with an idea that seems so obvious, you wonder why no one had thought of it before.  Such is the case with the Gospel Music Hymn Sing concert event and video recording, spearheaded by Gerald Wolfe.  Then again, maybe someone had thought of it before, but didn’t have the motivation, means, and ability to execute it.  That is certainly not the case for Wolfe, who has long been one of gospel music’s greatest champions for the preservation of the hymns of the Church, and who possesses an unrivaled combination of musical and business acumen.  The result speaks for itself: a large gathering of gospel music’s most beloved artists, a beautiful venue packed with people and enthusiasm, and a sparkling video product that does justice to songs that are among the greatest ever written.

Though dozens of southern gospel’s best take their place on stage, Gospel Music Hymn Sing features a wonderful role reversal: the artists on stage spend more time singing along with the audience than they do singing on their own, and their excitement over that fact is highly evident.  All but a couple songs are carried primarily by the congregation, with an assortment of professional singers featured on verses here and there.  In this format, Wolfe doubles as emcee and song leader, with a heavy dose of “kid in a candy store” added.  A band including Stan Whitmire, Mylon Hayes, and Mike Hopper keeps the music simple and classy.  The source of song is the legendary “redback” Church Hymnal, with page numbers called throughout the evening to guide the congregation.  (I’m not sure if they were placed in the pews, or if people brought them, but it seemed like most of the audience had one.)

Every song over two hours is enjoyable, but I’ll list my main highlights, in chronological order:

I am blessed to be a member of a church that still has hymnals and a song leader, so I don’t have much knowledge of what I often hear from those whose churches are trending toward projector screens and praise teams.  So I’m not going to get on a soap box or cast aspersions.  But I do believe that there are a large number of Christians who are craving the opportunity to participate confidently in worshiping the Lord in song.  I believe that many desire to hold a hymnal in their hand and sing the harmony notes written there.  I also believe that encouraging Christians to sing, play, and read music is essential for the future of gospel music.  The electricity in the sanctuary of First Baptist Church in Morristown is palpable during the Gospel Music Hymn Sing, for all of these reasons.  I say this with as much sincerity and conviction as anything I’ve written here: we need more of this.  The Gospel Music Hymn Sing is a must-have for any gospel music fan, and is sure to encourage your soul, and put a song in your heart.