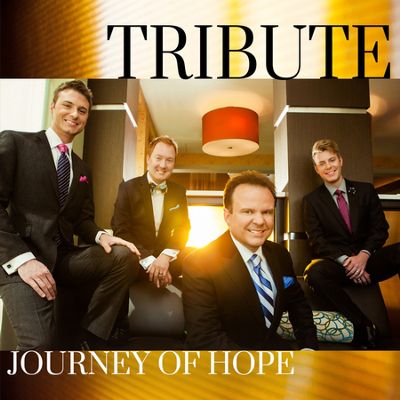 Tribute Quartet has been on a steady upward climb since its establishment eight years ago by former Wilburns members Gary Casto and Josh Singletary.  Tenor Riley Harrison Clark and bass Anthony Davis have rounded out the quartet for the past three years, providing the consistency in personnel needed for such a rise.  For the first time in 2014, Tribute garnered a Top 10 nomination for Favorite Artist in the Singing News Fan Awards, and their most recent mainline recording, Our Anthem (acclaimed here), received nominations for Favorite Album and Top Song, for “Good News from Jerusalem”.

For the next step in their journey, Tribute has moved from Crossroads’ Sonlite label over to Daywind’s artist roster.  Their debut with their new label is Journey of Hope, an 11-song collection that continues to charter new territory musically for the quartet.  Though they retained long-time producer Roger Talley, the musical vision is clearly not to do the same-old, same-old, but to forge ahead.

From the first notes of the opener “He Can Do It Again,” the listener knows this recording will be something a little different from Tribute.  It’s a Kenna Turner West/Lee Black composition with a progressive tilt, which suits Clark, the quartet’s most talented feature vocalist, well.  Other songs like the rollicking “Everything I Need” and the poignant “God of All My Days,” would seem equally at home on a Signature Sound or Assurance recording.  The most notable stylistic excursion is the Latin-infused “Those Who Know Me Know,” which is one of the album’s most memorable tunes.  It isn’t traditional quartet, but it is catchy and fun.

Of course, not every song is as “out there” as that, and Journey of Hope has enough to retain the interest of the more old-school fan.  Included is a fairly standard quartet rendition of the well-known “I Remember the Day” and an energetic Wilburns cover, “I Could Sing About Heaven”.  Though a dramatic orchestrated track introduces and envelops “I Am a Soldier,” only a few notes are sung before Kyla Rowland’s familiar touch is easily recognized.  The album’s first single to radio, it is a great vocal performance by Casto and a powerful arrangement by Talley.  Clark carries the recording’s other traditional ballad, “I Will Rise,” written by the dynamic tandem of Dianne Wilkinson and Rebecca Peck.  Baritone Singletary is featured on one of my favorites, “All Made It Ashore”.  I love a good Biblical narrative, and it is lifted expertly by Marcia Henry out of Acts 27.

With Journey of Hope, Tribute offers up a little bit of everything and does it, as they always do, with a little flair and a lot of class.  I have little doubt that it will be their most successful recording yet…until the next step in their climb.