Just for fun… The Confused Quartet 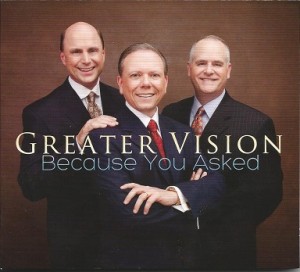 The newest recording from Greater Vision is a collection of gospel music classics, designed to give their fans a chance to hear the current vocal configuration sing some of their most requested songs not currently available on CD.

Highly dedicated Greater Vision fans will notice that eight of the twelve songs on Because You Asked were also on Memories Made New, a 2008 recording made soon after Jacob Kitson joined the group.  (To my ear, the same tracks are used on these songs.)  Even then, most were re-recordings of songs the trio had done years ago.  Therefore, much of Because You Asked is composed of numbers Greater Vision has now recorded on at least three different albums.  However, as Memories Made New is no longer in print, this recording serves its purpose of giving old and new fans an opportunity to hear them perform some favorites once again.

There are four songs never before recorded by Greater Vision.  The obvious highlight of the album is “His Eye Is on the Sparrow,” sung solo by Chris Allman and backed by Gerald Wolfe on piano and Jason Webb on the Hammond B3 organ.  You really can’t beat that trio of talent in gospel music, or any genre of music as far as I’m concerned.  Allman is also featured on “The Unseen Hand,” while the entire trio carries a toe-tapping rendition of “Come And Dine”.  Finally, one of my favorites on the CD is Rusty Goodman’s “Until You’ve Known the Love of God,” which hasn’t gotten recorded nearly as often as I would have thought.  It’s been mostly forgotten since the 1970s.  Wolfe is the featured vocalist on this song, and on several others throughout Because You Asked.  After having very little solo work on their most recent Daywind release, For All He’s Done, it is great to hear more from one of gospel music’s all-time greatest voices.  Perhaps one benefit of this new recording will be to give Wolfe some more material to feature himself on during their concerts.

Because You Asked is obviously not made to knock anyone’s socks off with outside-the-box song selection or fancy arrangements.  But it does give you another chance to hear one of southern gospel’s top groups deliver songs that have stood the test of time.