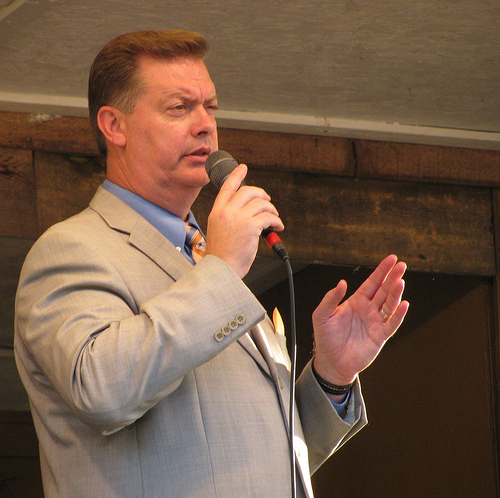 The announcement yesterday that Mike Holcomb and the Inspirations were parting ways after 42 years resonated strongly in the tightly-knit southern gospel community.  Holcomb is widely admired for his skill at the bass-singing craft, but also for his exemplary spiritual and personal example.  Singing for over forty years in a group one doesn’t own or manage is extremely rare in gospel music, and it is bittersweet to see that end.  The loss of Holcomb is significant for the Inspirations, but many lives will surely be helped by his move into full-time evangelism.

Mike Holcomb holds a special place in gospel music for me on a personal level.  As I’ve said before, I didn’t grow up listening to the major gospel groups, with one exception.  Until I was in college, the only southern gospel group I had ever seen live, and the only one for whom I had a recording, was the Inspirations.  So certainly for me as a kid and teenager, Holcomb was the definition of a quartet bass singer.  I didn’t have anyone else to go by!  But as I’ve learned in the last several years more about this genre of music and about all of the other great bass singers who have come down the line, I still believe I can say that “6’4, 94” fits the bill as a model bass.

Holcomb is a little different from George Younce or Pat Barker, very melodic basses who are lead-singing experts in a bass range.  And he’s not quite like a Tim Riley or Jeff Chapman, who make a living in the basement, hammering low note after low note.  That’s not to say Holcomb isn’t skilled in those aspects.  But Mike is one of the best there ever was at providing a rock-solid rhythmic foundation for traditional quartet singing.

When I think about songs featuring Holcomb, the first songs that come to mind are not songs for which he has an extended solo.  In his most celebrated features, he is stepping out in call-and-response formats, going down octaves or up octaves to provide excitement.  Examples of this are signature songs for him: “When I Wake Up (To Sleep No More),” “When I Walk on Streets of Gold,” “Is That Footsteps That I Hear,” and “Roll On Jordan”.  There are other perhaps less remembered songs that are similar showcases for this ability: “Soul Savin’ Meeting,” “He Made a Way,” “When Reveille Blows From Heaven,” and “In the Twinkle of an Eye” are some of my favorites.

And while I don’t remember him first for solo features, Holcomb has provided plenty of memorable examples of those: “In God’s Hands,” “If You Only Knew,” and “God Makes No Mistakes” are the finest that come to mind for me.

Though he doesn’t hang out at the bottom of the keyboard during most of their songs, Holcomb is widely regarded as one of the lowest bass singers in gospel music history.  If you’ve gone to enough Inspirations concerts, you’ve probably seen that ultra-low range showcased at some point.  “Bend Away Down Low,” from the late 80s, is a good example of this on a studio recording, but there’s something about him hearing him and feeling him rattle the building in person that is exciting.

How did I do covering some of Mike Holcomb’s best work?  What are some of your favorites?  Do you have any special memories or thoughts on this legend of gospel basses?  I’d love to hear from you!