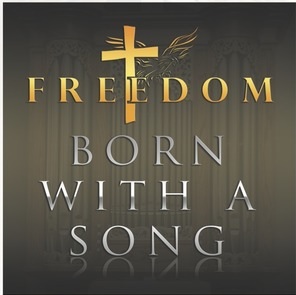 The latest offering from Freedom, Born With a Song, is interesting on a few different levels.  Chief among them are the circumstances surrounding its release.  Soon after the project was finished and released, lead singer and co-founder Josh Garner accepted the lead position with the Dixie Melody Boys.  The change has been accompanied by good will and encouragement from all parties involved, including Freedom’s other co-founder, tenor John Rulapaugh, which is refreshing.  But it makes for a slightly unusual situation with this recording.  Fans of Freedom, as well as fans of Garner and Rulapaugh, should consider this a must-have collector’s item, since the two voices may never be heard together again.

The exit of Garner from Freedom is not the only personnel-related circumstance affecting Born With a Song.  Baritone Tyler Vestal’s departure from the trio during the recording process created a void that had to be filled.  Who better to fill that void than one of the greatest voices in gospel music today?  Arthur Rice, along with helping produce the recording, stepped in to record the baritone vocals.  You would be hard-pressed to find a recording made by anyone this year with a better collection of voices than Garner, Rulapaugh, and Rice, all of whom are gospel music “all-stars” from a vocal standpoint.

Finally, the song selection makes Born With a Song an intriguing recording.  As the title indicates, most of the songs were drawn from the Singing News charts from the years Garner and Rulapaugh were born (1979 and 1977, respectively).  This creative sort of concept is something you don’t see too often, and also makes for a great assortment of songs, many of which have not been heard enough over the last few decades.  My two favorite examples on this recording are “It Made News in Heaven,” from the Kingsmen’s long list of hits, and “I Won’t Walk Without Jesus,” out of the Hinsons’ catalog.  Another highlight is “I Believe He’s Coming Back;” I was flabbergasted to see how few times it had been recorded since the Happy Goodmans had a monster hit with it.

Only three of the eleven tracks on Born With a Song are on the slow side in tempo.  So 75% of the time as a listener, you’re tapping your foot or bobbing your head, which is a good percentage for my taste.  The style is straight-up no-frills gospel singing (with tracks produced by Gerald Wolfe), and these are voices that can bring it with the best of ’em.  Fans of gospel music who came up in the late ’70s, or who enjoy the music from that period, should find a lot to love about this album.  It’s worth a listen for anyone who likes traditional singing of tried and proven hit songs.  Especially among non-mainline label releases, Born With a Song should go down as one of the year’s best.