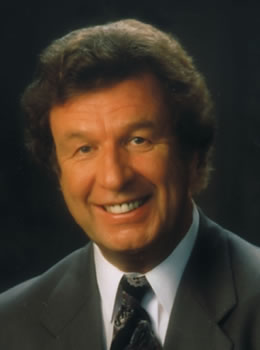 Should the Lord tarry His coming for another 100 years, our great-grandchildren may look back on the era of gospel music in which we live, and they will probably consider Bill Gaither to be the era’s most influential figure.  Through his “bright idea” for the Homecoming series, he helped spark interest in gospel music for a new generation.  With the Gaither Vocal Band and other outlets, he produced some of the best music of this era.  But I believe his most enduring legacy will be the songs.  While not discounting the contributions of Mosie Lister, Dottie Rambo, and others, I think it’s safe to say that Bill Gaither is the most influential Christian songwriter of the last 50 years.  Fifty years from now we may remember him (and his wife Gloria) the way we now remember Fanny Crosby and others from around the turn of the 20th century.

Bill and Gloria co-wrote a majority of the most enduring Gaither songs.  In these co-writes, I believe Gloria tends to be the primary lyricist, while Bill puts the notes on the page.  Both lyric and melody are usually exquisite.  A typical Gaither lyric is marked by creative imagery and emotional depth.  Think of the imagery of the first verse of “He Touched Me”: your mind pictures the shackles, and the touch of Jesus’ hand.  The hope that the Resurrection of Christ gives has never been stated better than in “Because He Lives,” arguably Gaither’s most celebrated work.  Musically, a Gaither song is lush, dramatic, and imaginative.  You’re not going to find many three-chord Gaither songs.  “I’ve Just Seen Jesus,” even without any key changes, has as dramatic a musical progression as you will find.

The influence of Bill Gaither is evident when taking a look at my personal music collection.  He has written or co-written more songs in my library, with duplicates included, than any other single person.  For most people with a wide-ranging gospel music collection, this is probably the case.  See below for a breakdown of Gaither songs in my collection.  Because so many Gaither songs stand on their own, without being defined by a particular artist, the “personal favorites” list reflects how I rank the songs themselves, not the individual performances necessarily.  My favorite recording is given alongside the song.

Unique songs in my collection: 170

Songs with 10 or more versions:

Oldest recording: “Praise for the Lord”, Imperials, Jake Hess and the Imperials (1964)

Newest recording: “Just Because of You”, Legacy Five, A Wonderful Life (2011)

How about you?  Do you agree about the sphere of Gaither’s influence, or am I off?  What are your favorite Bill and/or Gloria Gaither songs?