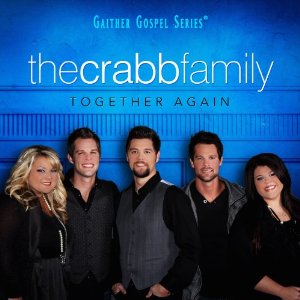 Announced in October of last year, the Crabb Family’s reunion tour is in full swing already in 2012.  In support of the tour, Together Again is the family’s first project together in several years after the siblings took separate paths of music ministry.  I have to disclose that I am not familiar with the family’s earlier work with the exception of a few hit songs, so I listened to this project with relatively fresh ears.  Together Again finds the Crabb Family adapting to multiple music styles, with a seeming ease and comfort that family familiarity breeds.  While it sounds to me like Jason gets just a little more featured time than the other members, it is a true family project, with each sibling getting time to shine.

The ten tracks on Together Again primarily fall into one of two camps stylistically.  Four of the ten songs are essentially secular country tunes.  While they all contain positive messages with a basis in faith and family, the gospel is not the focus.  The best of these is “No Problems,” which showcases a bright and cheery lyric with an infectious steel guitar-infused groove.  It would sound perfectly at home on today’s country radio, as would the autobiographical opening track, “Back to the Front Porch”.  “You Can’t Do That Anymore” has a lyric lamenting the loss of the “good ol’ days” that gets a little cheesy in spots, but it’s the kind of song that generally appeals strongly to a country audience.  Finally, “I Love You This Much” is the only one of the country tracks that makes a gospel reference, albeit a short, predictable, and vague one in the bridge.

Of the six gospel tracks, the clear strongest, and best performance on the entire album, is “If There Ever Was a Time.”  Each of the siblings trades off solo lines of the poignant lyric, which is given a gorgeous and soft piano-and-strings treatment.  This song is a tremendous message of encouragement through tough days.  I’d love to hear more of this sort of thing from the Crabb Family, or anyone for that matter.

“God Has a Plan” is another track with a modern country sound, only this time it’s paired with a solid message on the providence of God.  The remaining four songs are definitely on the progressive side of the ledger.  They could probably be classified as full-blown CCM stylistically, with heavy percussion and lots of electric guitar.  My favorite of these is “Life Meets Grace,” which proudly proclaims in the bridge that “my hope is built on nothing less than Jesus’ blood and righteousness”.  Unfortunately, it takes until this track, which is ninth, before Jesus is mentioned by name on the album.

Ironically, the Crabb Family’s re-entry into southern gospel recording doesn’t contain a single song that would be easily classified as southern gospel, surely not in a traditional sense, anyway.  But the goal obviously wasn’t to make a record that hit the sweet spot of a traditional quartet fan.  While the album isn’t in the personal stylistic wheelhouse of a traditional fan like me, it is a very well made recording with strong tracks and great singing.  Fans of either country music or progressive southern gospel will find lots to love, and fans of the Crabb Family will surely be delighted with their first offering in years.