Mega Album Review: We Will Stand Our Ground (Kingdom Heirs) 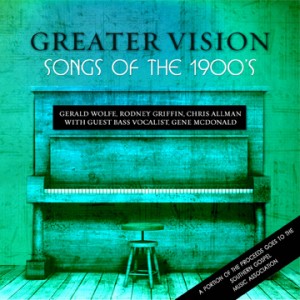 Songs of the 1900’s is a special offering from Daywind and the Southern Gospel Music Association, originally intended as part of the celebration of the 100th anniversary of southern gospel music.  It is unusual in that it is not a true Greater Vision project, and as of right now, is not being sold at their table or on their website.  Gerald Wolfe helped to shed some light on the project in the comments section here.  It is evident that the project is intended to sound like a recording from the early 20th century: it was recorded with all vocalists around a single microphone, with only piano accompaniment, and no post-recording editing.  The arrangements are also what you might expect from that era, with only one solo line on the entire album.  The four voices sing the songs together, just as they would be written in a hymnal, with no big finishes and high notes.

Speaking of four voices, Gene McDonald joins Greater Vision to provide the bass part for this project.  Stan Whitmire contributes the only instrumentation on the piano.  The nature of the recording means that it doesn’t sound as refined as typical modern recordings, but the vocals are nonetheless impressive.  The blend is good, and the pitches are spot-on, even without any mixing or tuning.  The first song in particular, “Leaning on the Everlasting Arms”, is made to sound like a very early recording, with some scratchy vinyl record sounds at the start.

The songs selected are, for the most part, very familiar hymns of the era of Christian music around the 1900s.  One exception may be “It Is Here I’m Satisfied”, with which I was unfamiliar, at least.  It is one of my favorites from the project, and includes a shift to a “peppier” rhythm for the last two choruses.  “I Feel Like Traveling On” has a similar shift near the end.  When the arrangements are so very simple, things like that stand out and have an enjoyable effect.

Other than the two rhythm shifts, the only deviations from a straight, as-written arrangement are key changes on a few of the other songs.  “Rock of Ages” contains a single solo line from Chris Allman, the only one on the recording.  “Revive Us Again” closes with an a cappella chorus.

Hymn projects are released often in southern gospel music, but the way the songs were arranged and recorded makes Songs of the 1900’s refreshingly different.  This isn’t necessarily one of those CDs you put in the car when you’re on the highway, or play on your iPod while you’re working out.  But it is a great project to listen to in a peaceful mood, and a great project with which to sing along.  It is most definitely an easy album to listen to, with four well-blended voices singing in a normal range, and very classy piano accompaniment by Whitmire.  With a portion of the proceeds from the CD going to the SGMA, the buyer and listener is doing a small part to help preserve the history of this great genre of music.  Songs of the 1900’s is a unique and refreshing nod to that history.