When God Shows Up 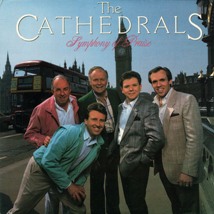 It wasn’t until some time later, after I had begun to immerse myself into the history of southern gospel music, that I found out that I most certainly was not alone in claiming it as my favorite.  I also came to realize that the album was just as impactful on the southern gospel landscape as it was to me personally.  The Cathedrals in 1987 consisted of what I think still is the best collection of voices ever assembled in a southern gospel group.  George Younce and Glen Payne were already southern gospel heroes and would become legends.  Mark Trammell was firmly established as one of the best baritones in gospel music, and is now considered by many to be the greatest baritone in the genre’s history.  Many attribute the same superiority to the powerful Danny Funderburk among tenors.  And the “icing on the cake”, so to speak, was Gerald Wolfe, the young but incredibly talented pianist and vocalist who, with one song on this very album, would launch his two-decade (and counting) reign as one of southern gospel’s greatest voices.  Producer Lari Goss and the London Philharmonic Orchestra combined to present epic arrangements never before heard on a southern gospel album.

The album is a beautiful example of balance and variety.  Half of the ten songs are a cappella, showcasing the magnificent vocal ability of the group in breathtaking arrangements.  Each of the a cappella songs have a different style: they consist of a powerful chorus, a standard hymn, a spiritual, a convention song, and a magnificently slow and complex piece.  In an amazing stroke of symmetry, each of the five non-a cappella songs features a different vocalist.  Every member of the Cathedrals left his unique brand and influence on the record.

Let’s take a look at the songs:

Talk about setting the tone…from the first note of “Hallelujah! Thine the glory!”, you get a 44-second preview of the kind of powerful singing that fills the rest of the album.  They only sing through the chorus once, which makes the song an effective “introduction” for the album.

As the the closing notes of the powerful first track are still resonating, horns and a rolling banjo kick in for an energetic take on a Stuart Hamblen classic.  The Cathedrals, and many other groups, had recorded the song many years prior, but this arrangement would become one of Younce’s signature performances and a staple in their live program through their retirement.  This is probably also the most memorable rendition of the song in the genre’s history.

The second a cappella number on the album, this is a great example of taking a simple hymn and transforming it into a exciting performance.  The first verse and chorus are done “straight”, after which the key is changed and Funderburk takes the lead in a slowed-down second verse.  Still more key changes and tempo changes serve to create a crescendo throughout the song, building to a powerful, high finish.

4. “For What Earthly Reason”

George Younce used to always say that the Danny Funderburk was equally able to sing tenor with a power like no other, and also deliver a beautiful, soft melody like no other.  On this Dottie Rambo gem, you get a taste of both.  Rambo had a unique gift of crafting lyrics and melodies that illustrate the believer’s relationship with God in such a personal and poignant manner.  Combine that with Funderburk’s unrivaled ability to deliver the emotion of a lyric, and you have a masterpiece.  Funderburk has other songs that he is perhaps more remembered for, but to me this is his best performance.

There are relatively few frills and thrills on this a cappella spiritual compared to other songs on the album.  There is only one key change this time, but each chorus is arranged a little differently, and the last one is delivered with more power.  My only complaint about the song is that to me it seems to drag a little bit at the end.  Three and a half minutes may have been half a minute too long.  But it’s still a fun and unique performance that showcases the quartet’s vocal ability well.

This is one of my favorite renditions of probably my favorite convention song.  Only in this style of music does everyone sing a different chorus, and I’m sure every listener is like me, repeating the song so they can sing through each part once.  Now for the bass! “For heaven’s holy king, for heaven’s holy king…”  I love the song, and I love this a cappella treatment.

The impact Gerald Wolfe made in his short time with the Cathedrals is astounding.  This is a song that helped usher in the modern, big tracks and big vocals, era of southern gospel music, and kicked off what is surely a  Hall of Fame career for Wolfe.  What an honor it must have been for the little man with the huge voice, and the newest and youngest member of the group, to be able to deliver what would become arguably the Cathedrals’ signature song.  It is also still today the signature individual performance for Wolfe and for Scott Fowler, who “took over” the song when he joined the quartet.  There’s not much else to say about the song, since I’m sure everyone reading this is already very familiar with this masterful performance.

This time it’s Mark Trammell’s turn in the spotlight.  Like the more famous “Statue of Liberty”, it applies a patriotic theme as a spiritual metaphor.  Like Funderburk, Trammell has a wonderful ability to convey the emotion in a lyric, which he does very effectively in the second verse.  The drum work creates a solemn mood in the verses that gives way to the triumphant chorus.  It’s probably not as celebrated today as some of the other songs on the album, but it’s just as good a vocal performance as any of the other ballads.

This Ira Stanphill song is beautiful but difficult to sing even before being given the wonderful a cappella arrangement found here.  The Cathedrals take their time singing it, letting each line fully deliver its message to the listener.  Lots of diminished chords make it a challenge to try to sing along with, but from the moment it starts, all you really want to do is listen anyway.  There are no solos, no power high notes…the touching lyrics are allowed to just do their work.

This is my favorite Glen Payne performance, and is probably my favorite Cathedrals song overall.  In my opinion, it has the most powerful lyric on the album.  Robert Griffith wrote this ballad that uses Abraham’s wonderful proclamation to his son Isaac that “God shall provide himself a lamb”, as a type of the vicarious death of Christ.  Payne is a legend for good reason, and it’s because of his ability to take a lyric and deposit it into both the ear and the heart of his audience.  I love the touching lyric in the second verse that says “Unto Bethlehem this God reached down to man/And gave to us the only Son He had”.  Funderburk takes the lead near the end of the last chorus and the Cathedrals  finish off the song with some of the most powerful notes on the record.