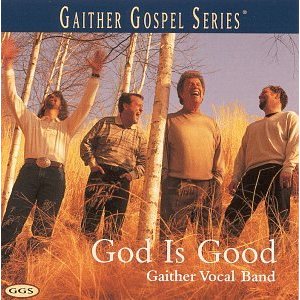 The Gaither Vocal Band lineup of David Phelps, Guy Penrod, Mark Lowry, and Bill Gaither is probably the most popular of all the iterations of the gospel super-group.  While many, including me, appreciate the amazing vocal abilities of the Michael English/Terry Franklin lineup, among others, the addition of David Phelps to Guy Penrod was a match made in heaven, and the popularity of the Vocal Band and the Homecoming Series soared.  The incomparable ranges at the tenor and lead spots, combined with smooth and solid Lowry on baritone, allowed Gaither to craft huge arrangements, the likes of which have rarely been heard in southern gospel music.  This lineup was all too short-lived, however.  They recorded a Christmas project, a live Homecoming, and two mainline studio albums before Lowry made way to Russ Taff at baritone.  While that lineup continued to great success with Phelps and Penrod, to me it doesn’t quite measure up to the Lowry configuration.  That configuration was never better than on their first of the two non-holiday studio albums, God Is Good from 1999.  It is twelve songs and 48 minutes of high-flying vocal action, ranging from barnstormer to ballad.

The album gets off to  great start with this catchy tune that’s somewhere between country and spiritual.  Featuring Penrod and Phelps in the verses, this is exactly the kind of song that should open a CD, with an uptempo rhythm and an uplifting lyric.  Especially enjoyable are the seventh chords sustained throughout much of the chorus.  Lyrically, the title says it all.  “God is good, yes he is!”

The pace slows down considerably for this largely acoustic ballad.  Lowry carries the lead all the way through, but there are no solo features.  A Bill and Gloria Gaither composition, it’s a tribute to the southern gospel radio tradition, and contains lyrics and titles of hymns weaved throughout.  The only negative is that it clocks in at nearly six minutes, and with no solos or big notes, it drags on a bit if you’re not paying close attention to the words.

3. “Whenever We Agree Together”

Another “Bill and Gloria” song, this rollicking tune takes its lyrical cue from Matthew 18:19.  Penrod is featured in the verses, and the arrangement is relatively simple, with no key changes.  There are some nice high notes here and there, but nothing overly dramatic.  This song is just good fun.

Guy Penrod and Kevin Williams get writer credits along with Bill and Gloria on this soulful ballad.  Bill gets to sing on the first verse and, as usual, does an admirable job smoothly delivering the lyric.  Phelps gets the second and third verses and takes it to the rafters at the end with a high D5.  The chorus contains some scorching soul harmonies with some high notes sprinkled in.

This infectious uptempo number contrasts the “good news” of the gospel with the news the outside world usually has to offer us.  Penrod has the feature, and hits some of his highest notes at the end of the last verse.  The brass stabs in the chorus shape the rocking and rolling sound that will have you tapping your toes.

The Cathedrals did it well, as did Larnelle Harris, but the epic arrangement and highlight-reel vocals of this version will forever define this Bill and Gloria classic.  If the Gaither Vocal Band has a signature song, this is probably it.  We all know this one backward and forward, so I won’t waste too much time writing about it.  You know about the three key changes and about that D-flat from Phelps near the end.  There are some songs that are guaranteed to tear a crowd to pieces every time it’s sung, and this is one of them.

This was the first song on the Gaither Vocal Band’s first album way back in 1981, but it’s really an understatement to say it’s completely revamped here.  The first version had a subdued, light pop sound, while this one is dominated by drums, electric guitar, and soaring vocals.  The chorus is sung four times, and each time it’s done differently rhythmically.  The lead in to the last chorus blows me away every time.  If you like big notes and a big sound, you’ll love this one.

I love when groups do this on an album: this song is basically the opposite of the preceding one.  This is a gorgeous acoustic-flavored take on a classic hymn.  Lowry gets his first spot to shine on the first verse.  I’ve always been drawn to Marks Lowry’s smooth baritone voice; I think he’s quite underrated.  David Phelps knocks the second verse out of the park, touching a powerful C5.  You’ll enjoy the smooth harmonies and touching classic lyrics of this one.

This is out of the same vein as the title track and “Whenever We Agree Together,” but it’s not as strong, in my opinion.  Penrod does a good job with his feature, but the lyric and melody are relatively vanilla.

Along with “Because He Lives,” “He Touched Me” is arguably Bill Gaither’s most enduring and celebrated composition.  And to me, this is the definitive arrangement.  The melody of the verses lends itself to a soft, almost jazzy, delivery.  It strikes a balance with the modulation to the powerful last chorus.  From the tight blend in the first verse, to Lowry’s wonderful feature in the second verse, to the big notes in the last chorus, it is a real treat from beginning to end.

Penrod is featured on the Vocal Band’s well-known cover of this Oak Ridge Boys country gospel classic.  This is right up Penrod’s alley, and he delivers as you would expect.  I’ve never been a huge fan of this song overall, but there is no doubt that the Vocal Band performs it very well.  The high notes in the last chorus finish it with a flurry.

We’ve all heard probably hundreds of versions of our National Anthem, and it can admittedly get tiresome listening to “another rendition.”  This is not just another rendition.  The a cappella arrangement here is the best I’ve ever heard.  It’s unique and fresh, yet it stays true to the musicality of the original.  It showcases terrific vocal talent, yet keeps the focus drawn on the lyrics.