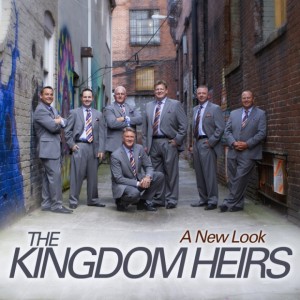 The end of 2014 and beginning of 2015 found the Kingdom Heirs in a state of flux with the departure of longtime owner, MC, and baritone Steve French.  I must admit as a big Kingdom Heirs fan, I wondered about what would happen with the group in the long term after such a significant change.  My fears were assuaged with the addition of the talented Brian Alvey to fill the baritone role, and the continuance of the recording process with Sonlite Records.  The result is the group’s brand new album, A New Look, the title of which has an obvious double meaning.  While A New Look does contain some new wrinkles, it continues with the solid musical foundation laid by one of gospel music’s most consistent and talented quartets.

The biggest difference to me between A New Look and the Kingdom Heirs’ other recordings in recent years is less reliance on Dianne Wilkinson’s songs.  Do not get me wrong…no one’s a bigger Dianne Wilkinson fan than me, and one of my favorite things about the Kingdom Heirs is that they record her tremendous songs.  But it’s also good to get some other writers involved when the right songs come up.  The quartet’s most recent Sonlite recording, Redeeming the Time, had eight Wilkinson cuts.  Before that, We Will Stand Our Ground had ten, When You Look at Me had nine, and True to the Call had eight.

A New Look contains only four Wilkinson gems, but they are up to the usual quality.  The album opener and title track is a co-write with the amazing Rebecca Peck, a classic Kingdom Heirs-style quartet number with a lyric on the supremacy of Scripture.  That’s followed by “Power in Those Bones,” a co-write with lead singer Arthur Rice, which is the recording’s biggest ballad.  It took a couple of listens to really take hold of this song’s message, which is a little unusual.  Drawn from a story in 2 Kings about the bones of the prophet Elisha bringing a man back to life, it is probably the most pointed message specifically to older Christians I remember hearing.  When I thought about that, and I thought about the age of the typical southern gospel concert attendee, I understood the need for this lyric.  The message on the ability of all Christians to contribute to the Kingdom of God can be applied to anyone, though.  It took a couple of listens, but “Power in Those Bones” became one of my top picks from the recording.  The final Wilkinson cut is the album closer, “The Church Will Overcome,” which new baritone Alvey recorded first with the Talleys a couple of years ago.  This hard-driving burner was one of my favorites then, and is just as good now, a great addition to the Kingdom Heirs’ repertoire.

With other writers getting involved more, it is a tremendous pleasure to see another Rodney Griffin song on a Kingdom Heirs record.  The quartet was a huge outlet for some of his best songs in the early 2000s, but in the past decade or so, the mega-hit “He Locked the Gates” was the only Griffin song they recorded.  “As Many Times” is a fun country-style song that has Rodney all over it, and it does not disappoint.  The immensely talented Mark Bishop contributes “The Chain Gang,” which serves as the recording’s first radio single.  This is a very unique song that evokes imagery of the classic “chain gang” of prisoners, in a minor key and with a heavy rhythm corresponding to their repetitive and arduous work.  It is bass Jeff Chapman’s main feature on A New Look, and he does his usual great job.  Terry and Barbi Franklin contribute their first cut to quartet in many years with “God’s Gonna Do More,” the recording’s most energetic fast-paced song.

The Kingdom Heirs didn’t have to look very far for another one of their song sources.  Drummer Dennis Murphy has penned a couple of hits in the past, “God’s Word” and “No Bones About It,” and he has two cuts on this record.  “More Like Jesus” is another in a long line of fun and light upbeat tunes from the quartet.  The ballad “Pieces” has the potential to be a major hit, in my opinion.  It is probably tenor Jerry Martin’s strongest feature with the Kingdom Heirs, and is also one of the strongest lyrical messages on the album.  Another big message song is found in “Never Made a Promise,” which is a very strong vocal showing from Alvey.  The songwriting trio of Sue Smith, Kenna Turner West, and Lee Black is usually found on more progressive groups’ recordings, and this song is a little bit outside of what the Heirs have recorded in the past, but it is outstanding.

I hope the Kingdom Heirs will always record at least one convention-style number, and they fulfilled my wish here with Wilkinson and Peck’s “Saving Us a Place in the Choir,” which contains full four-part counterpoint in the chorus.  It doesn’t have nearly the sheer energy of “The Joys of Heaven” and “Just Beyond the Sunset” from the quartet’s last album, but it is still a delight.  Keep ’em coming, songwriters and quartets!

The Kingdom Heirs may have a “new look,” but they haven’t gone anywhere, and don’t appear to be going anywhere anytime soon.  While different in spots, it is still true-blue southern gospel quartet music, and I hope that never changes.  Every Kingdom Heirs mainline release in the last decade and a half has been one of the strongest quartet recordings of the given year, and that continues in 2015 with A New Look.

2. Power in Those Bones (Wilkinson/Arthur Rice)

5. As Many Times (Rodney Griffin)

7. Saving Us a Place in the Choir (Wilkinson/Peck)

11. The Church Will Overcome (Wilkinson)