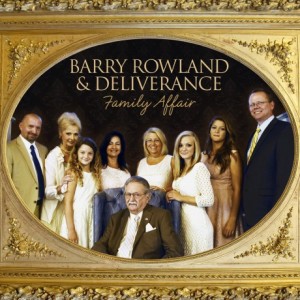 Kyla Rowland has impacted five decades of gospel music not only with her renowned songwriting, but through the singing ministry of herself and her family.  Today, the Rowland banner is primarily taken on the road by her son and his group, Barry Rowland & Deliverance.  This trio’s fourth recording for Crossroads, Family Affair, is actually a joint effort of three Rowlands generations.  Barry’s Deliverance is joined by the “original,” Kyla Rowland & Deliverance, consisting of Kyla and her husband Bob, and family friend Robin Rogers.  Also featured is New Deliverance, a trio of Kyla’s granddaughters.  All three groups bring something quite different to the table vocally, which adds to the enjoyment of this twelve-song collection.

Barry Rowland & Deliverance are featured on five of the twelve songs.  The CD opener, “Our Third Day,” is a straight-ahead barnburner looking forward to the final resurrection of God’s people at Christ’s return.  “I Think I”ll Just Go With God,” featuring Barry’s wife Tammy, has always been a favorite of mine from Kyla Rowland’s pen, and fits this group’s sound well.  One of the highlights of the CD is “Somebody Go Get God,” a powerful, mid-tempo plea for revival.  This song finds the trio doing what they do best: turning lead singer Shawn Rupert loose on a shout-‘er-out lyric.  It would be a strong candidate for a radio single, one that God’s people need to hear.

Kyla Rowland & Deliverance brings their unique and robust sound to three selections.  Mrs. Kyla leads “How Blessed,” which readers may remember was a hit for the Bowling Family a few years ago.  My favorite song on Family Affair is “Glorious Night,” a whale of song that melds together the night of Christ’s birth with the salvation experience.  I can’t put it better than Barry did to me in a conversation, when he said that soprano Robin Rogers “absolutely plowed it”.  This one got a few repeats immediately.

Finally, New Deliverance, with youthful and pure-toned bluegrass-tinged harmonies, is featured on three tracks.  Among them is the only song not written by Kyla Rowland, a cover of the classic hymn “Tell Me the Story of Jesus”.  They also treat the listener to a pretty, meditative ballad, “Purpose,” and the energetic CD closer, “This Jordan”.

The entire Rowland clan comes together for one song, and that is the recording’s title track.  The first verse and chorus brought tears to my eyes the first time I listened to it, as it takes the listener to the scene in Acts chapter two, when the disciples were in the upper room at Pentecost, waiting for the promise of the Holy Spirit.  They would have never been able to claim that promise if they were not all there, “with one accord in one place”.  This song, and this CD, isn’t just about the Rowland family.  It’s about God’s family, coming together for one purpose and goal: to love and to serve the God who saved us.

I suppose this is becoming an annual tradition at this point, but I once again highly recommend this new album from Barry Rowland & Deliverance, and the rest of the Rowland family.  Their music never fails to bless my heart, and I believe it will do the same for you.