Album Review: Through the Night (Perrys) 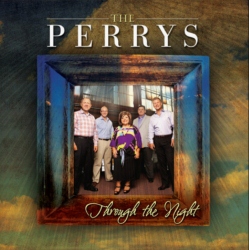 One of gospel music’s greatest mixed groups has produced another first-rate collection of new material.  Through the Night is typical Perrys fare in a lot of ways, and serves to further cement the current lineup of Libbi and Tracy Stuffle, Joseph Habedank, and Bryan Walker as one of the genre’s most dynamic.

While Bryan Walker did add his vocals to Blue Skies before its official release last year, the songs were selected for and originally cut with Troy Peach in the baritone slot.  While the baritone features on that album were some of my favorite cuts, you could tell that perhaps they weren’t quite in Walker’s wheelhouse.  This is not the case on Through the Night.  My favorite song on the project is Walker’s outstanding ballad feature, “Too Good to Not Be True”.  Written by Habedank with his mother-in-law, Adina Bowman, it has a well-crafted and poignant lyrical hook, and Walker delivers as good a vocal performance as you’ll hear in southern gospel.

Walker is also featured on the album’s best uptempo cut, the catchy, likely radio hit “One of These Mornings”.  It’s straight-up mixed quartet singin’ all the way.  The same can be said of the album opener, “I Got a Hold of God This Morning,” another in a long line of strong Kyla Rowland prayer songs.

The Perrys match up so well with Mrs. Kyla’s writing style, that you know you will get at least a couple of her songs on every project.  Also included is “The Blood and Its Power,” which was one of my favorite cuts (sung by Kyla herself) on the outstanding Barry Rowland & Deliverance album from earlier this year.  While the Perrys’ version, featuring Libbi, is a little more polished, I think the original packs a little more punch.  Still, I just love the song, and am glad the Perrys recorded it.

As usual, Libbi contributes a moving ballad feature, this time with the title cut.  Her emotional delivery of “Through the Night” will be an encouragement to listeners and concert-goers.

Joseph Habedank’s best feature is “Whosoever Will,” an beautiful story song he also co-wrote.  It illustrates the universal availability of God’s grace and love by featuring “opposite” characters in the two verses: a young, homeless woman, and an elderly, wealthy man.  The circumstances of their lives are different, but their need is very much the same.  What a wonderful thought, and it is developed well in this lyric.

For the project closer, the group chose to bring back one of their big songs from their “soprano years,” the power ballad “When He Spoke”.  Unlike some reviewers, I was not familiar with the original before listening to this version, so I was hearing with fresh ears.  Independent of comparisons to the previous version, this is one of the stronger songs on Through the Night, and hopefully a concert favorite with this lineup.  This could replace, or supplement, “If You Knew Him” as their big show-stopper.

As you would expect from a group of the caliber of the Perrys, Through the Night is one of the stronger releases in southern gospel music in 2012.  I don’t think it is quite on the level of the acclaimed Almost Morning from 2009, or some of their other albums from that decade, but it is a worthwhile addition to the collection of any gospel music fan.