Songs From Scripture #6: Put That on My Account (Ruppes) 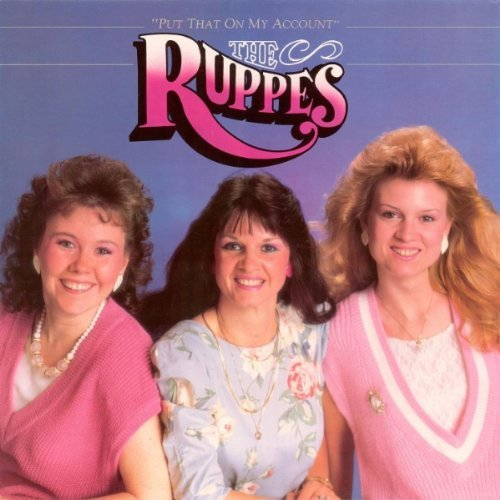 The Ruppes, whose recording career spanned three decades, were a trio consisting of mother Brenda and sundry combinations of daughters Heather, Kim, and Valerie.  They were never one of the very top-tier groups in a quartet-dominated industry, but they achieved greatest notoriety in the mid-90s with hits like “Under His Wings” and “Angels in the Room”.  The three sisters, of course, now travel as Sisters.  The most recognizable trait of both Sisters and the Ruppes is and was the intricate family harmony that has very few, if any, rivals.  Perhaps a less celebrated but just as impressive aspect of the Ruppes’ music was the lyrical depth their songs so often displayed.

My favorite example of this is the title track to their 1986 album, “Put That on My Account”. Written, as many of their songs were, by evangelist Tom Hayes, it tells the beautiful story of a rather obscure Biblical figure, and makes the stirring application to the life of a Christian.

The opening lines of the song introduce the subject character:

I love a lyric that gets someone flipping and searching through their Bible, and this is definitely one.  To find this Onesimus, you have to go to the little book of Philemon.  This is a letter from the imprisoned Paul to a fellow Christian named Philemon who seems to have had a church assembly in his home.  After some introductory encouraging words, Paul, under inspiration of the Holy Spirit, gets to the main purpose of the letter in verse 10:

I beseech thee for my son Onesimus, whom I have begotten in my bonds.

Here is what we know about Onesimus, according to this passage: Paul led him to the Lord while in prison (v. 10); he was a servant or slave belonging to Philemon (v. 16); he had run away from his master after some wrongdoing, probably thievery (v. 11, 15).  We cannot be sure just how it is Onesimus ended up with Paul; perhaps he found himself imprisoned as well.  What we do know is that while with Paul, he got gloriously saved.  Paul, seeing the change in Onesimus, writes to Philemon, encouraging him to take his servant back, and to forgive him, as “a brother beloved” (v. 16).  The payoff line, and source of the lyrical hook of our song, is in verse 18:

If he hath wronged thee, or oweth thee ought, put that on mine account.

Paul so loved Onesimus and so wanted him to be restored, that he promised to himself repay any debt that the servant may have owed his master through his sin.  To the world, this may seem like a nice humanitarian story.  But God put it in his Word for a reason, and that’s because, to Christians, it is a picture of what Christ has done for us.

In this allegory, we were Onesimus, hopelessly in debt from our sin, ever running from our Master.  That Master, symbolized here by Philemon, is God.  The Master requires retribution; Philemon is not told to totally forget about the debt.  Paul is a type of Christ, who did for us what we could never do for ourselves.  He paid the debt of our sin on the cross of Calvary.  He lived a perfect life and had no sin to account for.  But He willingly took the sins of the entire world and put them on His own account, taking the punishment for us.  The chorus of the song rings out these words of victory:

“Put that on my account” is what the Savior said

“Put that on my account and cancel all the debt”

My sins where oh, so bad

And great was their amount

But now I’m free and glad

The entire fifth chapter of Romans deals with the nature of Christ’s sacrifice for us; here’s most relevant portion to this discussion:

8 But God commendeth his love toward us, in that, while we were yet sinners, Christ died for us.

9 Much more then, being now justified by his blood, we shall be saved from wrath through him.

10 For if, when we were enemies, we were reconciled to God by the death of his Son, much more, being reconciled, we shall be saved by his life.

11 And not only so, but we also joy in God through our Lord Jesus Christ, by whom we have now received the atonement.

The second verse of the song deepens the spiritual application, including this wonderful line:

But that’s not all there’s even more than this

He’s given to me His righteousness

The gettin’ is good here, folks.  Paul didn’t just tell Philemon he would pay Onesimus’s debt.  He instructed Philemon to accept and treat his former slave just as he would Paul himself.  In verse 17 of Paul’ letter:

If thou count me therefore a partner, receive him as myself.

Earlier in verse 16, we see the new relationship between Philemon and Onesimus:

Through his death and resurrection, Christ didn’t just take away our sin debt.  He totally changed our position with the God the Father.  Once nothing more than runaway slaves, we are now children of God.  From Romans 8:

15 For ye have not received the spirit of bondage again to fear; but ye have received the Spirit of adoption, whereby we cry, Abba, Father.

16 The Spirit itself beareth witness with our spirit, that we are the children of God:

17 And if children, then heirs; heirs of God, and joint-heirs with Christ; if so be that we suffer with him, that we may be also glorified together.

When God sees us now, He sees us through the lens of Jesus Christ his Son.  Instead of seeing our sin, He sees Christ’s righteousness.  From 2 Corinthians 5:

19 To wit, that God was in Christ, reconciling the world unto himself, not imputing their trespasses unto them; and hath committed unto us the word of reconciliation.

20 Now then we are ambassadors for Christ, as though God did beseech you by us: we pray you in Christ’s stead, be ye reconciled to God.

21 For he hath made him to be sin for us, who knew no sin; that we might be made the righteousness of God in him.

Have you thought lately about all that Christ has done for you, though you didn’t deserve it?  Pull out your Bible, turn to Philemon, and take five minutes to read through the letter.  Not too long ago, the Ruppes’ version of “Put That on My Account” was released digitally.  Use 99 cents to download it if you don’t have it.  Rejoice that your sins are no longer on your account!