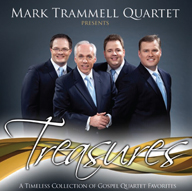 The Mark Trammell Quartet’s latest offering, Treasures, is a table project composed of songs previously recorded by the Cathedral Quartet. It seems Cathedrals tributes have been en vogue lately, but this particular project differentiates itself enough to be a worthwhile addition to any gospel music lover’s collection.

The songs selected for the project span multiple Cathedrals eras. Only half of the twelve songs were recorded by the Cathedrals when Mark Trammell was traveling with them. In fact, the only song contained within that was originally a Trammell feature is his signature “Master Builder,” which has an arrangement pretty much identical to Mark’s other recordings of it. There are three songs that pre-date the Trammell era of the Cathedrals (“Gentle Shepherd”, “I’ll Have a New Life”, and “Then I Met the Master”) and three songs that were recorded after Trammell left the legendary quartet (“Echoes from the Burning Bush”, “That Day at Calvary”, and “I Thirst”). The variety in the song selection is a definite plus.

The arrangements, for the most part, stay very true to the original Cathedrals arrangements, by design. The most notable exception is “Statue of Liberty”, with a sweeping Lari Goss-orchestrated track, originally used on a recent Couriers project, that puts the part of the second verse in a minor key.

Five of the songs feature Pat Barker prominently, and he does not disappoint. He is certainly a worthy heir to Younce’s vocal supremacy among basses in gospel music. His performance on “I Thirst” is one of the highlights of the project. He also rivals Younce with his solos on “Wedding Music” and “Old Convention Song”, and step-out lines on “Echoes from the Burning Bush” and “I’ll Have a New Life”. The other solo features are handled by Trammell (“Master Builder”, “Then I Met the Master”, and “That Day at Calvary”), while the remaining songs are sung in ensemble.

Other highlights of note include energetic deliveries of “Bloodwashed Band” and “Boundless Love”, and the two live cuts (“Gentle Shepherd” and “Old Convention Song”), with Gerald Wolfe on piano, recorded during the quartet’s recent DVD taping.

There’s really nothing not to like with Treasures, unless you just don’t like Cathedrals music at all, in which case I don’t know why you’re even reading this blog! As with any compilation of classics, song selection is the key, and there is an excellent variety of styles and Cathedrals eras present. As you would expect with any Mark Trammell Quartet recording, the vocal performances are top notch. Treasures is a well-executed tribute that any fan of southern gospel music should enjoy very much.

Song list:
1. Echoes from the Burning Bush
2. Gentle Shepherd (live cut)
3. Bloodwashed Band
4. That Day at Calvary
5. I’ll Have a New Life/Everybody Will Be Happy Over There
6. Statue of Liberty
7. An Old Convention Song (live cut)
8. I Thirst
9. Master Builder
10. Wedding Music
11. Then I Met the Master
12. Boundless Love

Available: MTQ website or a Mark Trammell Quartet concert near you.