Another look at Jerry Martin with the Kingdom Heirs

When God Shows Up

Songs from Scripture #1: “High and Lifted Up”

Part of what makes southern gospel music the best in the world are the sound, Biblical lyrics of its songs.  This is the first in a series of posts analyzing the Biblical basis of some of my favorite gospel songs.  Some may be obscure and specific, while others may be more general and obvious.  Hopefully all will be educational and encouraging for the reader. 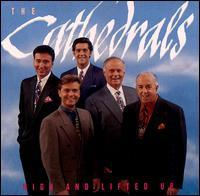 For the first entry in the Songs from Scripture series, we will be looking at a song from my all-time favorite songwriter. When you hear a song by Dianne Wilkinson, you can count on two things: it will be tailor-made for good old-fashioned southern gospel harmony, and more importantly, it will have lyrics securely grounded in Biblical truth. One of her very best ballads is “High and Lifted Up”, recorded by the Cathedrals as the title track to their 1993 album. Glen Payne delivers flawlessly, as always, but the powerful lyrics are what makes the song great. Let’s take a look at Wilkinson’s strong Biblical basis for the words she penned.

The first verse and chorus talk about Jesus being “high and lifted up” on Calvary in his role as God’s sacrificial Lamb for our sin.  It begins:

Jesus said “If I be lifted up
I will surely draw all men unto me.”

And I, if I be lifted up from the earth, will draw all men unto me.

So as Moses raised the serpent in the wilderness

So high and lifted up must Jesus be

Again, this is almost a direct quote from Jesus himself, in John 3:14:

And as Moses lifted up the serpent in the wilderness, even so must the Son of man be lifted up.

Jesus (along with Wilkinson) is referring to an event recorded in Numbers 21:4-9

4 And they journeyed from mount Hor by the way of the Red sea, to compass the land of Edom: and the soul of the people was much discouraged because of the way.
5 And the people spake against God, and against Moses, Wherefore have ye brought us up out of Egypt to die in the wilderness? for there is no bread, neither is there any water; and our soul loatheth this light bread.
6 And the LORD sent fiery serpents among the people, and they bit the people; and much people of Israel died.
7 Therefore the people came to Moses, and said, We have sinned, for we have spoken against the LORD, and against thee; pray unto the LORD, that he take away the serpents from us. And Moses prayed for the people.
8 And the LORD said unto Moses, Make thee a fiery serpent, and set it upon a pole: and it shall come to pass, that every one that is bitten, when he looketh upon it, shall live.
9 And Moses made a serpent of brass, and put it upon a pole, and it came to pass, that if a serpent had bitten any man, when he beheld the serpent of brass, he lived.

The people of Israel had sinned once again in their incessant complaining, and God had to judge it. But when the people repented, God devised a plan to deliver them. So too were we plagued by the consequences of sin, until, just as Moses made a serpent to deliver Israel from serpents, Jesus Christ became sin, lifted up on the cross, to deliver us from sin. If we will just repent and look upon the Christ of Calvary, we too shall live!

That’s enough to make any Christian rejoice, but Wilkinson has more in the second verse and chorus. In them, she writes of another way in which Jesus Christ will be high and lifted up. First, she gives another one of those “direct from Jesus” quotes that I love in a gospel song:

Jesus said, “I’ll surely come again
“That where I may be you will be near”

This is a paraphrasing of Jesus’ own words in John 14:3

And if I go and prepare a place for you, I will come again, and receive you unto myself; that where I am, there ye may be also.

She then writes of Jesus being high and lifted up in Glory upon his triumphant return to earth. The second chorus packs the punch:

This parallels what Isaiah saw and recorded in Isaiah 6:1-3

So in one song, with one four-word phrase, Wilkinson captures the Christian’s greatest victory, and his greatest hope. There’s Jesus Christ, high and lifted up on a cross to deliver us from sin. And there’s Jesus Christ, high and lifted up in glory to return for his Church. Let’s do what we can to lift Him as high as we possibly can, so that all men will be drawn unto Him.